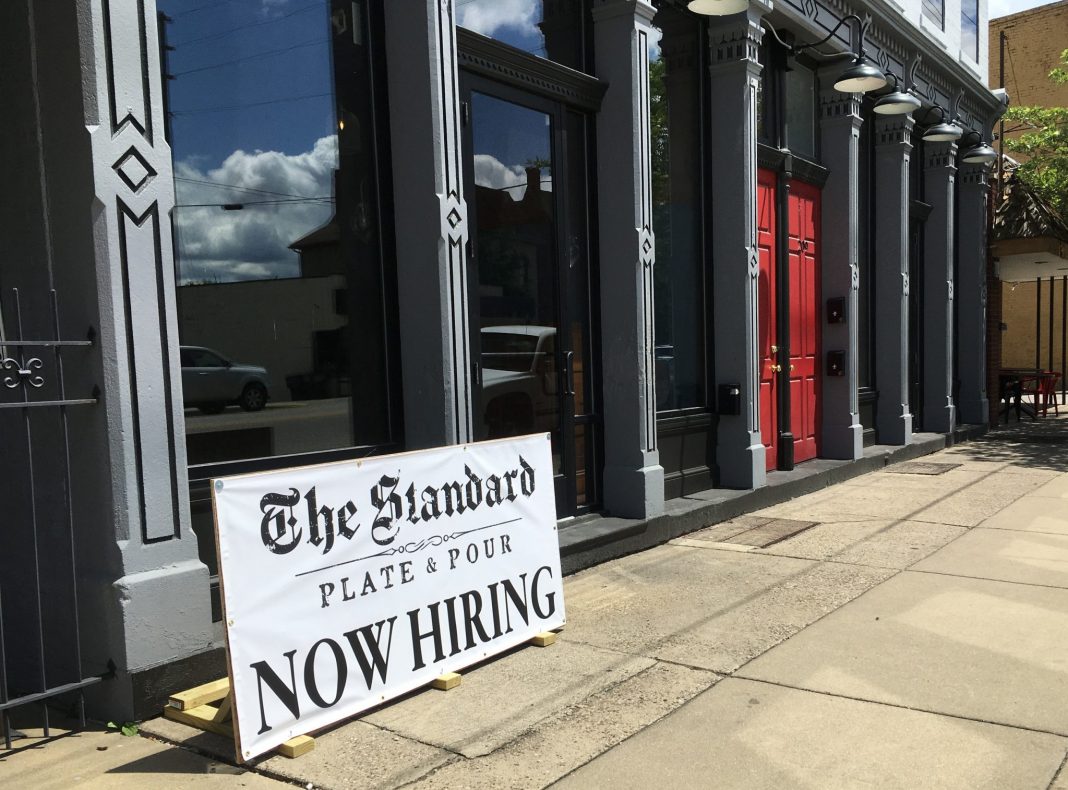 The Standard Plate & Pour is aiming for a June 24 opening in the same downtown New Albany restaurant space that housed Gospel Bird, which closed last November.

New Albanians of an older vintage will recall The Standard’s new home at 207 East Main, filling two ground floor rooms and the expansive rear patio of an Italianate building called the Bader Block (built in 1885), as the long-running Maytag Laundry. Their grandchildren probably patronized the Irish Exit bar, one of several food-and-drink businesses located there during the past decade.

The Standard’s founders are veteran restaurateurs Beau Kerley and Tim Smith. Kerley is a longtime co-owner of Bluegrass Brewing Company and opened Crescent Hill Craft House in 2014 with Smith running the kitchen. In 2017 they went together to establish the 812 Pizza Company in Georgetown (Indiana), just eight miles west of New Albany.

Smith’s and Kerley’s pizzeria in Georgetown wisely addressed suppressed demand in a satellite town with few dining options of its own, but The Standard will be the newest entry in New Albany’s ever-expanding downtown restaurant and bar scene. The business partners are relying on history — the city’s and their own — to find solid footing for their start-up.

According to Kerley, “The Standard” is an homage to the 19th-century local newspaper known as the the Ledger-Standard, a forerunner of the New Albany Tribune and today’s News and Tribune. Kerley recently spoke with the latter.

“We’re trying to embrace the history of New Albany and do some cool things, New Albany’s having such a resurrection here lately — it’s impressive.”

In the same newspaper article Smith described The Standard as a “pub with elevated food,” or a “dive bar with good food.” He’s applying his previous experience to this different setting.

“A lot of my recipes have been tried and true. I’m not recreating the wheel here. I’m going to go-to things that have always worked in my career and bring them to New Albany, because we’ve never been to New Albany before. And we’re excited about being in New Albany.”

Smith and Kerley are hands-on, seasoned veterans of the restaurant industry who have put their backs into their living, as Smith explained in a profile this spring at Insider Louisville.

“I didn’t go to culinary school, I went to the school of the 70-hour work week. I held myself to such a high standard, which is one reason I went from being a busser to executive chef in 10 years. If I was put on a station, I was going to be the best salad maker they ever had or the best pasta maker they ever had.”

The Standard won’t have very long to enjoy its status as New Albany’s newest restaurant. Two blocks away at 110 E. Main Street, Boomtown Kitchen is slated to open later this summer in the building formerly housing Cox’s Hot Chicken.