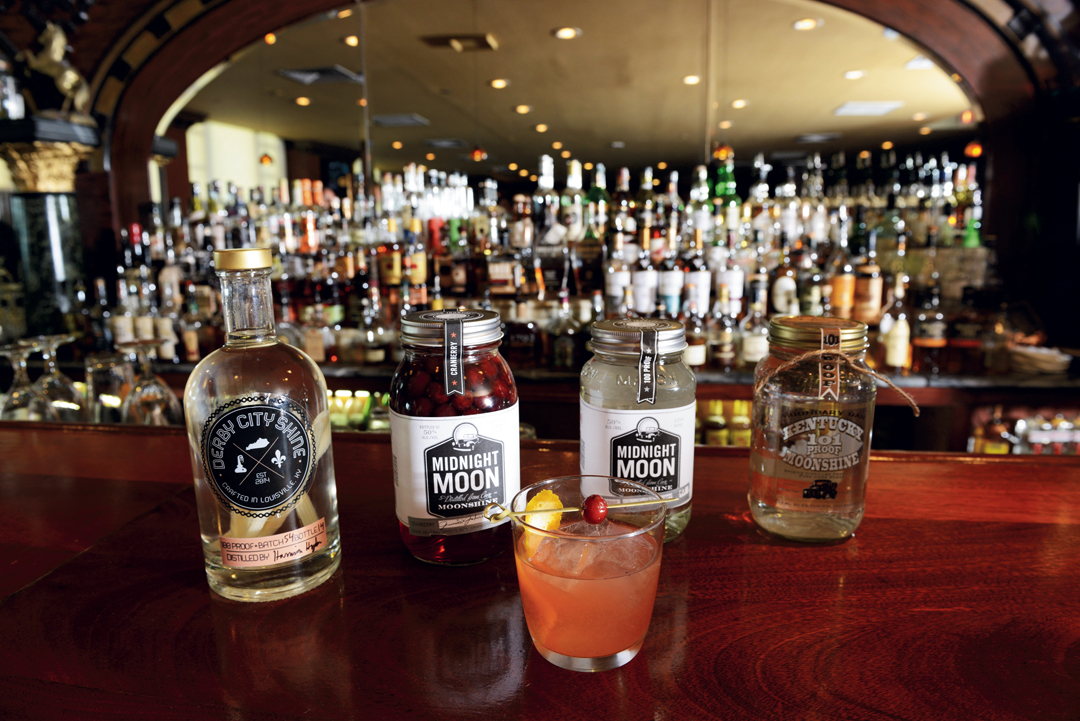 Baby Boomers hearing the word “moonshine” recall “The Beverly Hillbillies’” Granny Clampett sipping “white lightnin’” from an earthen jug labeled “XXX.” She made her “rheumatiz medicine” from an unknown recipe in an illegal still. Much the same occurs today on the Discovery Channel’s “Moonshiners” show, where its scofflaw characters make ‘shine by “recipes” that vary with nearly every episode. What’s available, affordable and fermentable is what gets used. Sometimes that’s sugar and water, other times it’s some ground corn, sugar and water. Once rotting strawberries served as the sugar source for a batch o’ hooch that emerged blue from the still. (Thankfully, the hard luck hill jacks ditched it.)

Similarly, legal distillers are making moonshine without a legally standardized recipe. (By comparison, bourbon makers must follow set guidelines.) The major difference between made-for-TV hooch and that made legally is their proof. Backwoods batches can be 120 proof or higher, while some legal ‘shines register a tame 40 proof. The bulk of the legal moonshine market options come in closer to 70 proof, though several are 100 proof.

Low-proof sippers are exceptionally popular for their easy drinkability. Great marketing helps as well since it captures the pseudo-naughty essence of drinking something that seems illegal. Heck, some legal moonshine is even packaged in a classic Mason jars resembling vessels of “Papa’s recipe” made by the Baldwin sisters on “The Waltons.”

Just when I thought this was going to be a simple piece to write, Food & Dining editor Ron Mikulak asked me, “Isn’t white dog the same as moonshine?” Lacking a good answer, I called local whiskey journalist Fred Minnick.

“Frankly, I don’t like the term moonshine because it really means nothing more than ‘illegal liquor,’” said Minnick, author of the book, “Whiskey Women.” “When people in the whiskey business talk about white dog, they’re talking about unaged distillate—legal whiskey distilled from a standardized mashbill,” which is the cereal grain recipe for the whiskey’s mash.

When I pointed out that legal moonshine makers also use their own standard recipes, Minnick said, “But none of their recipes meet any (third-party) standard for moonshine because there is none. It’s just a marketing term.”

That’s a notion not lost on the makers of Midnight Moon Moonshine, who cleverly leveraged NASCAR’s historic ties to bootlegging by partnering with famed driver and crew chief Junior Johnson. Johnson’s “trade” in the 1940s was that of high-speed hooch hauler. His crimes were reviled by North Carolina authorities but later revered by stock car racing fans impressed by his dirt track driving skills.

Part of moonshine’s surging popularity also is tied to new distillers needing revenue. Moonshine is easy to make and can go from start to store shelves in weeks. Making it requires none of the barreling, aging or evaporative loss common to bourbon making.

Some distillers use only sugar and water that’s heated, cooled and fermented with yeast. Others, such as Devil John and Ole Smoky 100 include varying amounts of ground corn for a distinct, grainy-nutty flavor. Once “cooked,” those ingredients are then distilled at least twice to boost proof and refine flavor.

According to Kevin Hall, operations manager at Louisville’s Distilled Spirits Epicenter, an instructional facility for distilling professionals, many clients come with the goal of making bourbon, but know they must first make clear liquor to generate cash flow.

“Very few people are capitalized well enough to get into distilling and make only bourbon,” said Hall. “So people use that equipment to make flavored vodkas or gins or un-aged brandies or moonshine to generate some revenue and build a brand first.”

One of the ‘shine segment’s top players, Ole Smoky, bottles its booze anywhere from 40 proof to 100 proof. Its lower-proof items include actual fruit and added flavoring to make straight sipping more appealing. Its 80 proof offerings drink more like a premade cocktail. Mixed in a cocktail is how Brent Goodin, founder and master distiller at Boundary Oak Distillery in Elizabethtown, prefers his 101 proof Kentucky Moonshine.

“America was a rum nation at first, but when the country became flush with cheap Caribbean sugar, it was easy to turn into liquor,” Goodin said. “And when they drank that, they mixed it with fruits as they came into season. I like mine mixed with lemonade.”

“(Women) are the main focus, but there are a lot of guys who don’t like bourbon either,” said Hyden. “It’s made to be poured over ice, but it mixes well, too.”

According to Hanna Kandle, bartender at the Old Seelbach Bar, moonshine cocktails are great sippers for winter evenings. She made a few for us while we shot photos, and she described some of her ingredients.

“My mindset right now is geared toward cool-weather flavors,” said Kandle. “So I made cranberry syrup with Earl Grey tea and am adding orange peel to use with it. I also made a ginger, peppercorn and Earl Grey syrup that turned out really well.”

Kandle, who also co-owns Meta Cocktail Lounge with fiancé Jeremy Johnson, said she’s not seen much moonshine around on local bars, but she hopes that changes.

“It would be cool to use it more, especially in drinks for people from out of town,” Kandle said. “The way people think of moonshine is that it’s very regional here. I think it’s a cool product.”

Add all liquids to an ice-filled mixing glass and stir. Strain into rocks-filled short glass. Flame orange zest over drink. Garnish with a fresh cranberry or two.

Ginger-Earl Grey-peppercorn simple syrup recipe: In a sauce pan combine one cup sugar and one cup water and bring just to a boil while stirring to dissolve. Add 1 tablespoon grated fresh ginger, remove from heat and let stand for 20 minutes. Add 1/4 cup peppercorns and three Earl Grey tea bags and let steep overnight. Strain next day into a clean bottle and refrigerate. Will last three weeks in fridge.