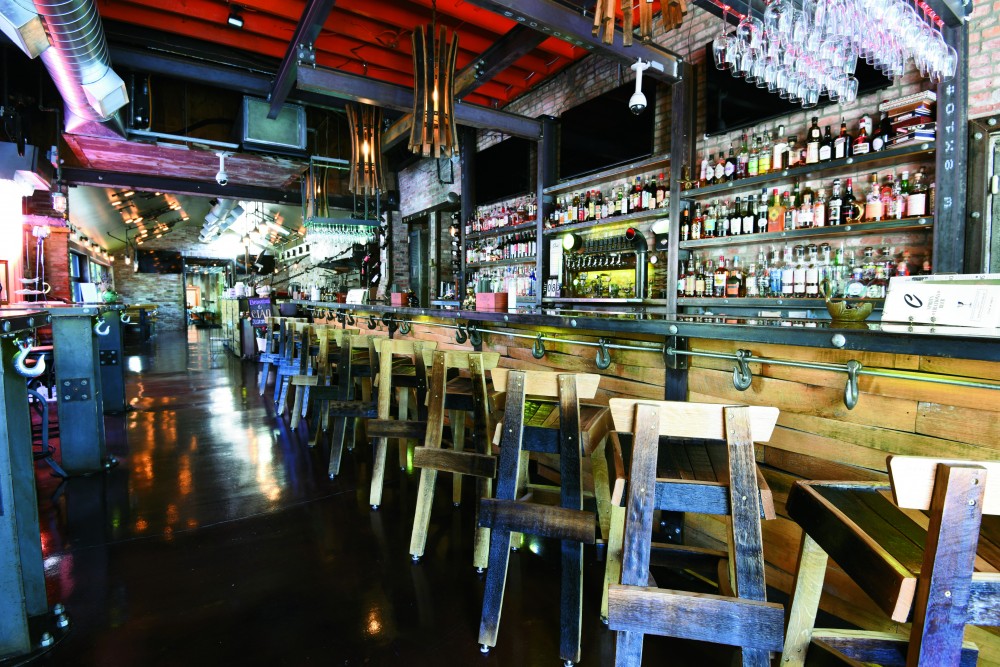 On the shady corner of Payne and Cooper Streets in Louisville’s Irish Hill neighborhood, a new dining spot has revamped the space once occupied by Baxter Station. Unlike its predecessor, Ciao now adds a jaunty modern element to the quiet residential area with a steel and glass entryway and glowing orange against muted black and burnt umber walls. One enters a stylish setting not easily categorized — steel and iron, beautiful wood, whimsical lighting fixtures — but which suggests “Relax, this is a playful place.”

Ciao is the creation of Bridgette Pizzonia, who had a successful 10-year run with Devino’s Deli at First and Main Streets downtown before construction of the Yum Center Arena changed everything. When that business closed, she took time off, remodeled her home and then tried an office job where she realized, “I’m not a sit-still-for-eight-hours-a-day-in-a-cubicle type of person.”

Committed to returning to the restaurant business, Pizzonia won the bidding at the tax sale for the Baxter Station property and started an 18-month project of completely renovating the building and laying the foundation “to really be a neighborhood place.”

“We met with the Irish Hill Association to address concerns about noise, parking, hours, deliveries. We talked with the Metro Council; we even had to go through re-zoning the rear of the building so that what was once an apartment could become the kitchen,” Pizzonia said.

Renovation was a family affair. Pizzonia’s brother, Fred, helped her both visualize the new interior and then create it. Longtime boyfriend Richard Sans — they have been a couple for 15 years — did some of the welding and metal work. Local craftsmen recycled wood into table tops, banquettes, and bar stools made out of Bourbon barrel staves. Even a supplier became inspired by the project and pitched in to do the distressed wood treatments in the rear dining area. The lighting fixtures — an odd blend of half-inch plumbing pipe, old pressure gauges and Edison lamps — is completely original. “It was like building a large puzzle one bit at a time,” Pizzonia said.

Matching this playful ambience is a heartfelt approach to Italian cuisine that is steeped in family traditions and yet ready with a welcoming handshake to modern iterations.

Pizzonia comes to her skills and vision honestly — from grandparents from Catanzaro in Calabria, Italy’s southern toe to her early childhood in Brooklyn. Her father was a skilled craftsperson, cook, and businessman who, however busy he might be between designing sets for Broadway plays or building homes, would cook for his children every night.

“Basically, I never found someone who could replace his cooking,” CPizzonia said. “And he is actually responsible for the inspiration of Ciao — home-style cooking at an affordable price.  We even use ome of his recipes, like our lasagna with crumbled egg in it.”

During renovations, Pizzonia also worked with Ice House Executive Chef Laurence Agnew to build a team that could grasp her vision and expand on it with their expertise. “There were a lot of ‘working interviews’  in the kitchen, not just talking over a table top,” Pizzonia said. “A lot of hard work was done by everyone.”

That hard work led to the hiring of Helen Impellizzeri as executive chef, Ashley Towning as beverage program manager, and Amanda Singheiser as pizza chef.

“Helen’s cousin runs the well-known Impellizzeri’s pizza shops, and she was brought up around specialty meats and sausage making,” Pizzonia said. “Ciao’s strong suit is my pastas and sauces coupled with Helen’s cured meats.”

When asked if an all-woman management team was ever a goal, Pizzonia said “No, that’s just how it worked out.” Pizzonia continued, “We work well together. Some people would guess that women would be nit picking on each other, but we collaborate well. We keep a close eye on our offerings and service, and if we get any negative feedback, we work together to fix them.”

A quick survey of online restaurant review sites shows that Ciao, opening just last November, has found its legs and is getting consistently positive feedback for its ambience, neighborhood setting, the quality of its diverse offerings, bar program, and fair pricing.

Appetizers include antipasto platters, spinach and cheese-stuffed ravioli, mussels, calamari, crispy salami and pepperoni chips with dip, and a popular “Monkey Bread,” a ring of crust wrapped around fillings that change daily. On one visit, it was a mixture of salami, roasted red pepper, mozzarella and yellow onions. On another, it was roast chicken with spinach, red onions, and Tallegio cheese. The ring is served with a marinara or Parmesan dipping sauce and is a fun taste treat while considering the menu’s other offerings.

Classic fare includes Pizzonia’s father’s signature lasagna and his spaghetti with 10-ounce meatballs. “We caution people against ordering more than one meatball, because they are huge,” Pizzonia said. “But if taking something home for later is your goal, it’s a good choice.”

Pasta dishes include linguine with clams; a nicely balanced capellini with pesto, broccoli, red peppers and grilled chicken; orecchiette with shrimp and a sun-dried tomato pesto; and a very popular potato gnocchi served in tomato vodka sauce with Italian sausage.

Meat and fish offerings range from an 8-ounce burger on a pretzel bun to a 10-ounce boneless rib-eye marinated in a balsamic-Calabrian chile sauce. There is roast chicken, stuffed veal cutlet, salmon saltimbocca, swordfish, spicy seafood puttanesca, and two popular risottos — one with asparagus, red peppers and olive tapenade, served with a choice of chicken or shrimp, and one with a blend of gourmet mushrooms dressed with herbs and black truffle oil.

A variety of salads complements these offerings. They are easily shared but can also command one’s full attention as a light entree. A great example is the roasted yellow and red beet salad served on greens with rhubarb and strawberries, a fig dressing, and dollops of pistachio-encrusted goat cheese.

Executive Chef Helen Impellizzeri’s hand is evident throughout.  A third generation American descendant of Sicilian heritage, Impellizzeri grew up steeped in Italian cooking but didn’t find her calling until after college.

“I was working as a server at the Seelbach’s Oak Room during the heyday of Jim Gerhardt, Michael Cunha, and sommelier Adam Seger when the artistry and craft of running a top-notch restaurant really hit me,” Impellizzeri said.

She then got her culinary arts degree at Sullivan University’s National Center for Hospitality Studies and, as a graduation present, gave herself a course to certify as a first level sommelier in Napa, Ca. She continued her development with a seven-year stint at Kingsley Meats where she learned everything from butchering and breaking down animals, smoking and cooking from scratch, to catering an event for 2,000 people. She had also worked at John Varanese’s River House and with Chef Agnew at Crushed Ice Catering before being introduced to Pizzonia.

“Bridgett is someone I respect. She has a lot of character and cares about her employees,” Impellizzeri said. “We blend the best of our two Italian families, her sauces and my family’s good sausage.”

“My attitude is ‘have fun.’ Yes, pull from recipes and tradition, but we’re trying to create a neighborhood place here that is approachable and enjoyable.” Impellizzeri continued. “We’re not trying to be ultra-fine dining.”

Throughout the menu you see all the elements of fine Italian dining but with the creative fun to which Impellizeri referred.  This is also evident in the pizza menu developed with Chef Amanda Singheiser on Pizzonia’s proven, New York-style thin crust.

There are ten pizza offerings, including classics like Margherita, Salsiccia, and Supremo.  But other offerings are turning out to be very popular, like roasted mushrooms with Taleggio cheese, white sauce, and truffle oil, or a scampi pizza with pesto cream, lemon, oregano and Peppadew peppers.  Perhaps the best, in this writer’s opinion, is the one that simply ends the debate whether pineapple and ham are appropriate pizza toppings. Forget them. Completely. Try the roasted butternut squash pizza with spinach, marinated tomato, and fig medallions, and you will never go to those shallow waters again. It is inspired.

Pizzonia also enlisted Ashley Towning as sommelier and beverage director, and a series of well-thought-out selections are available in every category. “Bridgette’s approach is to present modernized traditional family dishes, and we’re doing the same with our drinks,” Towning said. “We respect tradition but are bringing it into a modern setting with nothing but fresh, homemade ingredients, good and rare liquors, and wines that complement the menu.”

Citing that “some stuff out in the market is overpriced,’ Towning refers to their cocktail list of $9 and $11 offerings with playful names like “Affair in Messalina” and “Gone to Milan.” “We have what we call ‘Italian Handshakes,’ aperitifs and vermouths, Freixenet with Campari, really refreshing drinks,” Towning said. “We also have digestifs and dessert liquors and good coffee offerings.” The wine list is built on predominately Italian vintages, which offers another reason for many to explore somewhat unfamiliar horizons. Feel free to ask for recommended pairings for the food you’re ordering, and you will probably have a delicious and memorable experience.

Ciao Ristorante is open 11 a.m. to 10 p.m. Monday through Wednesday and 11 a.m. to 2 a.m. Thursday through Saturday. The lunch menu ends mid-afternoon, and the full dinner menu is available until 10 p.m. After this, the pizza menu and light offerings remain available.

It’s a jewel, full of personality, tucked into a quiet neighborhood and, as one web review gushed, “…from phenomenal gnocchi, to the tomato vodka sauce and the sausage made from scratch, you can close your eyes and imagine you are dining in Italy…” Perhaps you, too, will find a favorite dish there. F&D