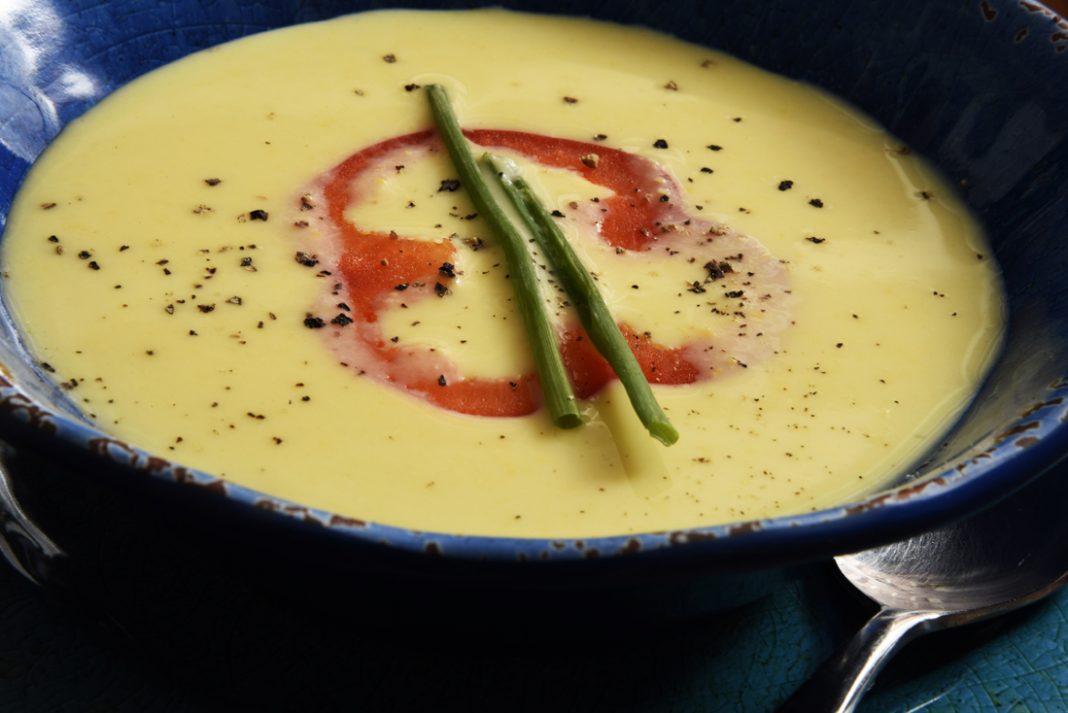 Although the focus of this issue is Bourbon, it is important to know that corn has other uses besides forming the backbone of a Bourbon’s mash bill. In fact, of all the agricultural benefits ensuing from the European conquest of the Americas – the so-called Columbian Exchange – the most universally successful has been corn. While it is hard to imagine the cuisine of southern Italy, say, without the tomato, or that of India or Thailand without the chile pepper, or half the economy of Switzerland or Belgium without chocolate (all New World foods unknown elsewhere before 1500), corn – or more properly maize – was the most quickly accepted and adapted worldwide. Before the end of the 16th century, corn was a staple crop of central Africa (brought by the Portuguese from Brazil), increasingly grown in India and China and making headway into European cuisines, most eagerly in Italy, where corn meal replaced millet in the cooked mush that gourmets now relish as polenta.

Of course, by the time Columbus stumbled upon it, maize had been the central crop of Meso-America for perhaps 5,000 years or more. For the sophisticated urban societies of the Aztecs, Incas and Mayans, maize was the sustainer of life, and so the foundation of their mythologies.

Scientists now think maize was bred by primitive Amerindians from a wild grass, most likely a plant called teosinte, which has an open seed head containing perhaps a dozen seeds. The maize selectively bred out of that ancient grass has a fully covered seed head, the cob, filled with a great number of seeds – some large cobs have 1,200 kernels or more. Interestingly, a corn cob always has an even number of kernels.

Once domesticated, with varieties adapted to different climates and conditions, maize spread widely. By 4,500 BCE corn was grown and eaten by New Mexico’s early cave-dwelling peoples; by 1,000 CE the mound-building cultures of the Mississippi and Ohio valleys flourished because of corn, and some 600 years later, corn provided by native peoples was what saved both the New England Pilgrims and the Jamestown colony from starvation in their first years in the New World.

The still-cherished American myth of the self-sufficient individualist, John Thorne argues in a 1994 issue of his Simple Cooking newsletter, can be attributed to the way corn can be grown and eaten. Unlike other grains, corn needed no continually plowed fields; a substantial crop could be raised among the stumps of a recently cleared forest plot. “If there are no peasants in this country,” Thorne muses, “it is because a peasant is wedded – as his family before him and after him – to a particular piece of land. In America, however, a man could take a bag of seed corn and an axe and head into the wilderness, to be there ‘as much a great lord as the other.’”

The most versatile of grains

Unlike other grains developed from wild grasses, such as rice, oats, rye or wheat, corn can be used as a grain (milled into meal and flour); as a vegetable, to be eaten fresh on or off the cob; and as a feed crop for raising livestock. But as Betty Fussell points out in her fascinatingly odd book, The Story of Corn, even if we, like Europeans who first tried corn, don’t care for its taste cooked as a vegetable or baked as a breadstuff, we cannot avoid, today, encountering the industrial adaptation of corn. Corn oil and corn syrup are ubiquitous in prepared foods, but chemists have also found ways to extract from corn components that are used in the production of, among other stuff, processed meats, cough drops, toothpaste, shoe polish, rubber and glue.

And of course the ethanol lobby is always heard from in election years. Corn can be mashed, fermented and distilled into alcohol to be used as a “renewable” energy source, mostly commonly mixed with gasoline. You can learn about the more refined aspects of turning corn mash into alcohol in Carla Carlton’s profiles of master Bourbon distillers beginning on page 18.

Although I enjoy a sip of Bourbon now and then, I really like to consume corn in its non-liquid forms.  Visually, I like the way bi-colored corn looks on the cob, but the yellow-white hybrid is, in my book, not as tasty and sweet as small-kerneled white corn. Corn is very easy to cook – five minutes in boiling water, or in the microwave, is all it needs. But last year I started cutting the kernels from the cob first, and sautéing them briefly in butter, and I will continue that technique this year.

I have tried several different dedicated kernel-cutting kitchen tools over the years, but found them all less satisfactory and messier than simply using a sharp knife. For creamed corn, pudding and corn soup, after cutting off the kernels, turn the blade around and scrape the cob thoroughly, getting the rich corn liquid from the cob, too.

Like tomatoes, corn is best when it is in season locally, usually between July and September. But cornbread is good anytime. I like to make hoecake, also called hot-water cornbread, which is a fried concoction, but buttermilk cornbread is more sophisticated – especially when made in a well-seasoned heirloom cast-iron corn stick pan that came with my marriage.

(2 ravioli over a half-cup of creamed corn would be a first course serving; 4 or 5 ravioli over a bit more creamed corn would do well for a main course serving.) I had this dish at Poogan’s Porch in Charleston a few weeks ago. I thought it a clever way to use pimento cheese, and an unusual way to use fresh corn. For a recipe for pimento cheese, see the Summer 2016 issue of F&D, where it was a side dish for hot chicken. Before I got an Atlas pasta maker, I made ravioli with wonton wrappers – satisfactory and very easy. Make the pimento cheese (or buy some in a deli) and make the ravioli first. (They can be made ahead and frozen.) If you wish, you can add color to the creamed corn sauce with diced bell peppers, or a bit of heat with diced jalapeños.

On a work surface, lay out one wonton wrapper, and keep the others covered with a damp towel. Brush the wrapper lightly but thoroughly with the egg wash. Place a teaspoon or so of pimento cheese in the middle of the wonton, and cover carefully with another wonton wrapper, stretching the top wonton a bit if necessary to cover the filling evenly and match edges up with bottom wonton. Use the tines of a fork to press the two wrappers firmly together. Carefully set aside and continue, making as many ravioli as you need.

When ready to cook, bring a large pot of well-salted water to a boil.

Add ravioli (if frozen, do not defrost). Swirl gently so ravioli do not stick ­to bottom of pot. When ravioli rise to the surface, lower heat to medium, let cook for a minute or two, then remove with slotted spoon, place atop creamed corn and serve.

For the creamed corn:

of kernels; scrape the cobs and add

pulp to the kernels)

Cut kernels from cob and scrape against cob to press out milky liquid. In a large saucepan, melt butter over medium heat. Add corn and onion (and peppers, if using) and sauté 5 minutes or so, until onions soften slightly.

Whisk together sugar, flour and salt and pepper to taste. Combine with heavy cream Add cream mixture to corn and simmer. If too thick for a pleasant sauce under the pasta, thin with water or milk. Serve in a shallow bowl topped with cooked ravioli. Garnish with minced parsley, diced tomato or diced pepper.

scraped from the cob

Heat oven to 350 degrees. In a medium bowl, beat egg yolks with salt, cayenne pepper, melted butter and milk. Sprinkle the flour over the corn and toss to blend. Add the corn to the egg-yolk mixture. Beat egg whites with sugar until they hold stiff peaks. Fold them into corn mixture and pour into a buttered casserole dish. Bake 35 minutes or until light brown on top and the mixture barely quivers when you shake it. The corn pudding will sink a little as it cools.

This can be made in a cast-iron skillet, but I like the look, and the crisp texture, of corn sticks, so if you have a corn stick pan, use it by all means. This recipe is the only one I use from a much-battered copy of my wife’s old Memphis Junior League cookbook, which opens directly to this recipe. For Southern-style cornbread, you must use white cornmeal.

Heat oven to 475 degrees. Use one tablespoon bacon fat to grease the cast-iron skillet or corn stick pan. Place greased pan in oven to heat as you prepare batter.

In a large bowl, combine cornmeal, flour, baking soda, baking powder and salt, and whisk to combine. Whisk together egg and buttermilk, and then add buttermilk mixture to flour and whisk to combine. Whisk in remaining bacon fat. Take pan from oven (carefully: It will be hot!) and add batter. (Each compartment of my corn stick pan will take about 2 tablespoons of batter.) Place in oven and bake about 20 minutes, until bottom is nicely browned and top is firm but springy. Serve warm with butter.

14 ears, with pulp scraped from cobs)

3   cups water (or milk for a creamier soup)

Melt butter in a saucepan, and when sizzling, add onion. Cook, stirring, until onion softens, 5 minutes or so. Add corn and sauté another few minutes. Add water or milk. Simmer corn, cov-ered, 20 minutes, or until very tender.

Purée soup with immersion blender or, carefully, in batches in a blender, until very smooth. Put corn purée through sieve or food mill, pressing on solids. Place corn liquid in a saucepan, add lime juice and heat through. Serve sprinkled with black pepper and chives. Can be made ahead and chilled. Can be served as a chilled soup or reheated. F&D