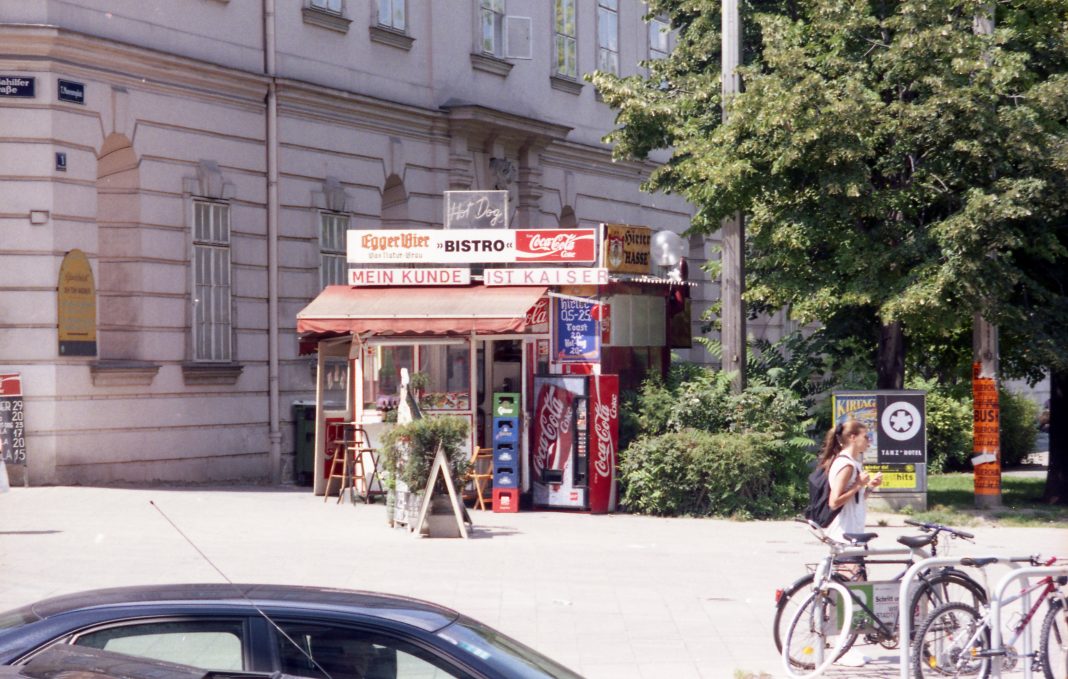 Many years ago when I was traveling in Europe as a budget-conscious backpacker, street food was an option generally preferred to sit-down meals, which were reserved for special (read: more expensive) occasions.

One of my favorite street corner dispensaries in Vienna, Austria was at the corner of Mariahilferstrasse and Museumplatz (today’s cover photograph, from 1997). A quick Google search reveals a vastly upgraded public space, now lamentably absent the eatery, but of course 24 years is a long, long time. It may have relocated.

My snack of choice at this Imbiss was the Käsekrainer sausage, a fat, cheese-stuffed artery-buster served with a roll and mustard. I’d walk from the hostel near Westbahnhof train station, down Mariahilferstrasse to the Ringstrasse, then pause for a Käsekrainer for sustenance before exploring the historic Ringstrasse.

Not all street food is sourced equally, and some items remain a pleasing mystery, as with bhoochakara gadda in India.

The Mysterious Street Snack That Has Baffled Botanists for Decades (Even DNA tests have yet to confirm its identity), by Barkha Kumari (Atlas Obscura)

Soon enough, I’d learn that my idle curiosity was, in fact, a mystery that has baffled and, at times, infuriated botanists for decades. This snack has been widely sold on the streets for decades—from the city of Haridwar in the north to Pune in the west and in several places in the south—and yet, somehow, no one seems to know what it is.

Returning to all the meats, a recent note in the San Francisco Chronicle opened my eyes to the existence of Aussie Pies & Sausages, in turn making me realize that I knew nothing about the tradition of meat pies in Australia and New Zealand. For dispassionate further details, visit Wikipedia

In Australia and New Zealand, a meat pie is a hand-sized pie containing diced or minced meat and gravy, sometimes with onion, mushrooms, or cheese and often consumed as a takeaway food snack. This variant of the standard meat pie is considered iconic.

Another article in the same newspaper, and a reminder both of the Bay Area’s cultural diversity and an under-appreciated culinary heritage in the Balkans.

Banitsa is a traditional Bulgarian dish made by layering sheets of buttered phyllo pastry with a mixture of eggs, yogurt, and white cheeses like sirene and feta for the simple and classic version of banitsa. Besides the classic cheese filling, this pie can be made with a myriad of different fillings, either savory or sweet.

Neither iru (the bean) nor ayamase (the dish) are on the menu at Funmi’s Cafe, which serves “modern Nigerian cuisine” at 3028 Bardstown Road. But this may owe to the fledgling nature of iru’s global distribution network.

The fermented African locust bean, known in Yoruba as iru, has an unmistakable cheesy tang that hits you before you see it. “Iru isn’t just a flavour on the tongue,” says Ozoz Sokoh, a food blogger. After an elaborate process of fermentation, the smell is essential to its flavour. Iru is further enriched once tossed in smoky, bleached palm oil.

For an edgy dessert, we turn to Shakespearean England for posset: “These possets blur the lines between a medicine that is health-giving and something akin to witchcraft, never quite settling on one or the other.”

Posset is a drink similar to our modern eggnog. It is made by pouring heated and spiced cream over a warm mixture of eggs, sugar, and alcohol. The result is a rich custard full of calories and fat that can sometimes curdle. This, in part, may explain why the earliest use of the word is a fifteenth century translation of Latin balducta or bedulta, i.e., “the curds of milk” (OED).

This random survey ends with the assumption that posset ended the evening (incantations notwithstanding), a bright new day has dawned, and it’s time for breakfast. For this, we look to South America and leap straight to Numero Uno.

01 Arepa: Arepa is a highly versatile cornbread made from ground corn dough or precooked corn flour. It is commonly consumed in Venezuela, Colombia, Panama, Puerto Rico, and the Dominican Republic. In Venezuela, arepa is eaten at any time of the day, throughout the whole country, and across all socio-economic groups. The golden disks with a crispy, browned crust are commonly stuffed with a variety of ingredients, and the combinations are seemingly infinite, from beans, cheese, and avocado to shredded beef and onions. For a Venezuelan breakfast, arepas are traditionally paired with a cup of strong coffee and hot dipping chocolate.

Why does “arepa” sound familiar? Maybe because of this.

Tastes of Venezuela, now available at Señora Arepa in NuLu