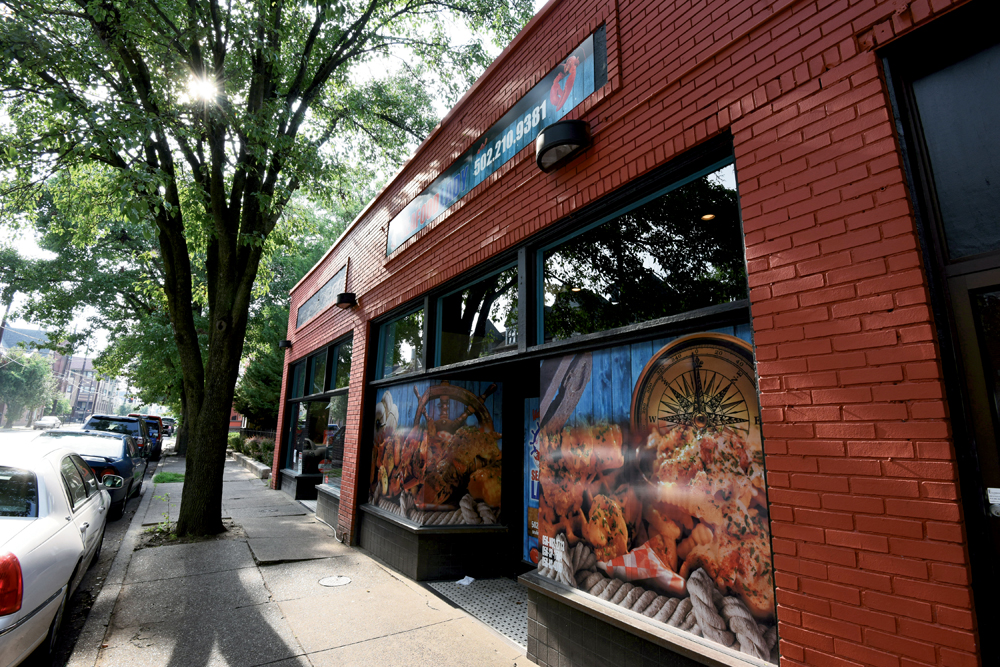 Nichelle Thurston never set out to become the Seafood Lady. In fact, she was close to graduating from Ivy Tech with a nursing degree when it all started. In 2015, Thurston prepared a seafood feast for her husband and three children. Even then she had a habit of cooking for 30 when she only needed food for five. Her family was so used to it that they stopped using plates, preferring to eat straight from the serving dishes.

A neighbor noticed the family dining on the front porch, the word spread, and soon Thurston was fielding catering offers in her Germantown neighborhood. In June 2015, just hoping to earn a little extra money,  Thurston put it out on social media that she was selling seafood dinners out of her home. She sold out the first day. The next day, she cooked double the amount and sold out again. She tripled the amount of food she was cooking and still kept selling out. After about two weeks, Thurston realized she was on to something.

That’s also about the time the nickname started. People knew if you wanted a good fish dinner you had to hit up the Seafood Lady. “Basically, it was just to say, ‘The lady that sells the seafood’,” Thurston explained. “But it kind of caught on like Catch-22. Everybody started saying it. After a while, I got a sign made that said ‘Seafood Lady.’ Then, I got a t-shirt made. When I started taking steps to start a business I thought, ‘Why change the name and have to redirect people?’ It worked perfectly.”

The popularity of Thurston’s home cooking brought some unwanted attention from the city’s code enforcement office and the neighborhood association. Thurston and her husband, Luke, talked about investing in a food truck. Like everything Thurston sets her mind to, it happened pretty quickly.

“It took about a week,” she said. “I was lying in bed, me and my husband; I got online and saw the food truck. I just felt it. I said, ‘This is it. Get up and let’s go now.’ We gassed the car up and went straight to Huntsville, Alabama. We saw the truck, bought it, and brought it home that day.”

Thurston paid $16,000 for the truck, but it needed to have some upgrades to work for her food and she had to get “Seafood Lady” painted on the side. Two days later, the Seafood Lady truck was open for business. It only took her that long because she wanted to do things right this time. She got a license from the city. Thurston and her husband, who doesn’t cook, sold food out of the truck for about 7 months.

In 2016, Thurston came across a location she liked at the intersection of Seventh and Oak Streets. Pretty soon after that the Seafood Lady had her first brick and mortar location. Word spread quickly about the unique new seafood restaurant with the huge portions and the Cajun seasoning. The crowds got even bigger after positive reviews in most of Louisville’s publications. The legend of the Seafood Lady was born.

Thurston became a Louisville culinary phenomenon without ever taking a cooking class, but she had the next best thing. She grew up in Pensacola, Florida and her grandfather happened to be a master chef. He picked up his culinary skills in the Navy, where he was a firefighter. He cooked for the 18 members of his squad and after he retired from the military, he kept cooking. He made chicken, fish, gumbo, duck, and even sushi.

“My grandfather did a lot of catering,” she recalled. “That’s how I learned to make food in such large quantities. He used to make a lot of Cajun food. Pensacola is not far away from New Orleans. We are all kind of interconnected. The Cajun kind of falls off the further away you get, but Pensacola is still in that mix.”

When she wasn’t helping her grandfather, Thurston was working as a compliance officer for a plasma company in Pensacola. Nine years ago, the company transferred her to its Louisville office. That’s when she met Luke, who was working as a merchandiser for Coca-Cola at the time. They were married in 2015, the same year that Thurston became the Seafood Lady. Luke handles all the office work of the business, accounting and payroll, while his wife handles the cooking.

The original Seafood Lady location, near the Oak Street Mini Mall, only lasted a year. The restaurant quickly outgrew the location. After having some trouble with the landlord over some requested upgrades, Thurston decided to move. On January 20 of this year, the new Seafood Lady restaurant opened at 103 W. Oak Street, near the intersection of First and Oak streets. The new space is much larger. It has a bar, a bigger kitchen, better bathrooms, and an outdoor patio. The old restaurant could only seat 35. The current location has room for 90 inside and up to 30 more on the patio.

Thurston’s reputation has grown to the point that the Food Network’s “Diners, Drive-ins, and Dives” showed up on opening day of the new location. Host Guy Fieri was among the first to sample several of the restaurant’s most popular meals: the Full Combo (a snow crab cluster, and 10 jumbo Cajun shrimp); the Crab Boss Meal (Cajun crab cluster, fried crab cluster, a fried lobster, 24 jumbo shrimp, 3 potatoes, 3 sausages, and 3 Cajun eggs); and the Lobster & Waffle (fried lobster tail served on a house-made waffle topped with 4 fried shrimp and drizzled with Sriracha-mayo sauce, and dusted with powdered sugar).

All the combos are served with two Cajun potatoes, an ear of Cajun corn, a Cajun egg, and a Cajun sausage. All other sides are an upcharge. The Seafood Lady offers some amazing sides. The Seafood Mac sports crab meat. Cajun corn, potatoes, eggs, and sausage are offered as stand-alone side dishes, and, of course, like every seafood restaurant, she offers coleslaw and hush puppies. Another of the restaurant’s special sides is the Chee-Sea Fries, crab meat and fries covered in cheese, which is essentially a meal in itself.

The new menu features more Po’ Boy sandwiches, served with fries. Patrons can get their po’ boys with shrimp, oyster, crawfish, or alligator meat. “When people that don’t eat seafood come in, they order the gator, because they think it tastes like chicken,” Thurston said.

Of course, fish is a mainstay at the Seafood Lady. The menu features tilapia, cod, whiting, and catfish. Thurston tries to locally source ingredients as much as possible, but that is hard with seafood in Kentucky. The catfish is locally farm-raised. Thurston said wild catfish has fallen out of favor because it has a “distinctive taste to it that most people really dislike. The one thing about our catfish is that it’s mild; it’s not overly fishy, but you can still tell it is fish. It’s more on the sweeter side.”

Being a mother of three, Thurston also has a Kid’s Menu with smaller portions of shrimp, chicken, and fish. There are also daily specials. New patrons must be warned that there is no table service at the Seafood Lady. You order at a counter and wait for your number to be called. Also, all the food is made to order; be prepared to wait 15 to 20 minutes.

Although she has 17 employees, Thurston continues to cook Wednesday through Sunday, which are the days the restaurant is open. She is the only one who makes the house-made sauce that tops most of the meals. It is one of her grandfather’s recipes and no one else knows it. She also makes all the Seafood Mac.

“Most of the time, the food the people are eating I helped make it in some sort of way. Maybe not from start to finish, but I had some type of influence on it,” Thurston said. “I have a manager, but I’m so hands on that it is kind of hard for me to step back. It is getting ridiculous. My husband says, ‘You need to stop it.’ But it’s hard for me to trust people to do certain things. I’m working on it.”

Thurston is going to have to learn to delegate, because the Seafood Lady is planning to add a second location. If anyone can figure out how to be in two places at once, it’ll be Thurston. In just two years, she went from selling food out of her home to cooking on the Food Network. Even she is surprised about what she has been able to accomplish. “I’m still adjusting,” she said. “It’s all about perfecting this step and then moving to the next step. That’s what is on my mind now.” F&D