Home LATEST NEWS Bourbon & Beyond: That certain spirit, and how to partake of it

Welcome to the last of three Food & Dining Magazine previews of Bourbon & Beyond, the world’s largest bourbon-themed music festival, which takes place right here in Louisville from Thursday, September 15 through Sunday the 18th at the Highland Festival Grounds (i.e., the Kentucky Exposition Center, 937 Phillips Lane).

Seemingly no stone has been left unturned in planning Bourbon & Beyond, and it’s a very pleasing sensory overload just reading the information release or perusing the web site. General admission and VIP passes in a variety of configurations are available at Bourbon & Beyond.

The hosts of The Bourbon Experience on The Team Kentucky Bourbon Stage include bourbon expert Chris Blandford and lifestyle guru, Emmy winner and Kentucky native Trish Suhr. They will be joined by special guests including the world’s leading bourbon authority Fred Minnick, Blackened American Whiskey distiller Rob Dietrich, Peggy Noe Stevens of Bourbon Women and Wes Henderson, co-founder of Angel’s Envy, among others.

Join renowned author and bourbon critic Fred Minnick who will take patrons on a tasting journey to discover your inner bourbon palate. From noticing the color and aroma, to that first mouth feel and flavor and finally judging its finish – Fred will describe the many ways to identify bourbon’s tasting notes and better train your bourbon tasting buds. Even experts will learn a thing or two! Featuring pours from Prideful Goat 15-year, Kentucky Senator 15-year and a Knob Creek 15-Year.

Join us for a blood-sucking good conversation and tasting with Ian Somerhalder and Paul Wesley, known to fans worldwide as the Salvatore brothers from The Vampire Diaries. We’ll delve into the story and success of their hand-selected bourbon. “Our friendship’s true bond strengthened while drinking bourbon, both on and off-screen for over a decade. Brother’s Bond is a nod to our on-screen characters, our shared love for great bourbon, and a reflection of the brotherhood we have formed over the years.

Distillers in the bourbon whiskey community are known for their creativity and camaraderie. Sometimes these “spirited” friendships defy competition and spark unique expressions that excite whiskey enthusiasts. Join Danny Wimmer Presents as we share a sneak peek into a new collaboration between one of Kentucky’s finest whiskey makers and a master distiller & blender known for his artistry in cask finishing.

The percentage of female whisky drinkers has more than doubled since the 90s. According to Johanne McInnis, a whiskey judge, and connoisseur who writes the WHISKY LASSIE blog, “today 40 percent of whisky drinkers in North America are women.” So let’s hear it for the girls! But, what do women really want in a whisky? This conversation will highlight how women’s palates differ and why more women are breaking the glass ceiling (and bottles!) in the industry.

Be a part of history in the making and witness the birth of “The Louisville” cocktail at Bourbon and Beyond! This past summer Mayor Greg Fischer called on all Kentucky Bourbon Brands to participate in “The Louisville” Cocktail Competition presented by Kroger. “We’ve all heard of a Manhattan, Singapore Sling, Long Island Iced Tea, and even a Moscow Mule. It is time for Louisville to be on the global map with a cocktail named specifically after our City,” said Mayor Fischer. Bartenders/mixologists representing five bourbon brands will compete for their recipe to be the inspiration behind the soon-to-be infamous cocktail served at bars across the globe. The winning bartender/mixologist will receive a $15,000 cash prize and the winning bourbon brand will forever be known as the inaugural bourbon behind “The Louisville.” Be among the first to try the new cocktail!

6:05 – 6:50 PM: All in the Family: A Roundtable With Kentucky First Families Of Bourbon

Even though whisky is a worldwide phenomenon, it’s no secret that 95% of the world’s bourbon is still made in Kentucky. It’s a business with a long lineage of generations of family and friendships. Many distilleries have passed down their heritage and experience to their children. These shared values, appreciation of heritage, but different paths, have been built by admiration, respect, and camaraderie for each other, which makes this industry different. Join us to hear how some of bourbon’s first families honor the past while building toward the future.

This live blending clinic has been a massive hit at the BBC distillery, WhiskyFest Chicago and private tastings with some of the nation’s most exclusive Bourbon Societies. Join us to deconstruct the blend as Dan takes participants through each component on its own to recreate the blend which is a SF World Spirits Competition Double Gold Winner.

According to Advanced Mixology magazine, “There are various reasons why cigars work well with whiskey, but perhaps the most common is their very similar flavors. You can find richness, smokiness, essences of spice, and a bit of sweetness. The warmth of a cigar brings comfort to your mouth, while whiskey brings stomach fire to keep away the cold! Both are also meant to be savored slowly.” The coveted line of Pappy Van Winkle bourbon is no exception and is the reason why Pappy & Company offers some of the most unique bourbon barrel-aged cigars in the world. Join Carrie Van Winkle Greener and her cigar partners from Drew Estate to discover what makes the Pappy cigars so special and why her dad, bourbon legend Julian Van Winkle, thinks rye whiskey is the perfect pairing.

Come learn from some of the biggest bourbon and whiskey influencers around the world on creating your collection. You don’t have to be a millionaire to start a bourbon collection that everyone will envy. But there are so many decisions and distilleries, you protest. Questions abound about bargain bottles or name brands, award-winners or upstarts. Whether you’re a newbie or a know-it-all, it’s sure to be a whisky wild ride!

Kentucky and Tennessee may be the ‘spiritual’ home of American whisk(e)y, but today there are more than 2,000 distilleries across the country, including Indiana, which has been historically recognized for its production. Today every state has at least one whisk(e) distillery, demonstrating the strength of this American liquor. Join us to hear from three award-winning distilleries as they discuss the history and growth in the industry and why they believe their state and brand get it right.

Join Chad & Sara from the YouTube show sensation “It’s Bourbon Night” for a live, audience participation Flight Fight – A blind head-to-head whiskey flight designed to help you polish your tasting skills and discover your whiskey profile preferences without the distraction of marketing.

In addition to more than 80 music acts over 4 days, attendees at Bourbon & Beyond can enjoy some of the best food and drinks that the Louisville area has to offer, as well as various sponsor activations and experiences.

● Boone’s Bourbon Speakeasy: Expect the unexpected and escape from the crowds when you step into our very own drinking den that’s serious about cocktails. Tell any of our down-home deft bartenders what kind of flavors you fancy and they’ll make you a custom creation unlike any other. While of course we feature the classics, don’t pass by our long list of spirits or seasonal house cocktails that changes by the day without missing a beat. 21+

● Brother’s Bond: Stop by the Brother’s Bond pergola for a break from the sun and a #TimeToBond with your fellow festivalgoers! While bartenders mix up custom cocktails you can take a photo in our photo booth or lounge in our seating area before the next set. 21+

● Bulleit Arcade: Enjoy some 80’s nostalgia in the fully immersive Bulleit Bourbon Arcade. Featuring newly restored classic’s to brand new state of the art games this Free Play palace is the place to be all weekend long.

● Four Walls (Always Sunny in Philadelphia): The Gang’s all here! Members of “It’s Always Sunny in Philadelphia” have come together to create a classic bar brand, a whiskey blended for bartenders and built to be a tribute to the barroom itself – to the Four Walls that hold our good times in and keep our troubles out. The initial limited-edition blend is an Irish American Whiskey. Fans can get their lips on some of this rare liquid at the Four Walls activation at Bourbon & Beyond to go alongside Glenn, Rob & Charlie’s The It’s Always Sunny Podcast Live debut on Saturday, September 17th. 21+

● Kiamichi: Bourbon & Beyond is all about family, and so are Kings of Leon and Willett Distillery. This year at Bourbon & Beyond, you can get your hands on the limited-edition ‘good stuff’ with Kiamichi during Kings of Leon’s headlining performance and all weekend long. Named after the river the Followill family has gathered along, year after year to party and generate their family’s best memories, stop by the Kiamichi activation so you can celebrate your best memories with Bourbon & Beyond. 21+

The COVID-19 policies for Bourbon & Beyond, will not require attendees to be masked, vaccinated or tested to attend Bourbon & Beyond. However, festival organizers do encourage fans to stay safe and will have increased sanitization stations throughout the festival. For more, go here.

Bourbon & Beyond thanks its premier and non-profit partners. 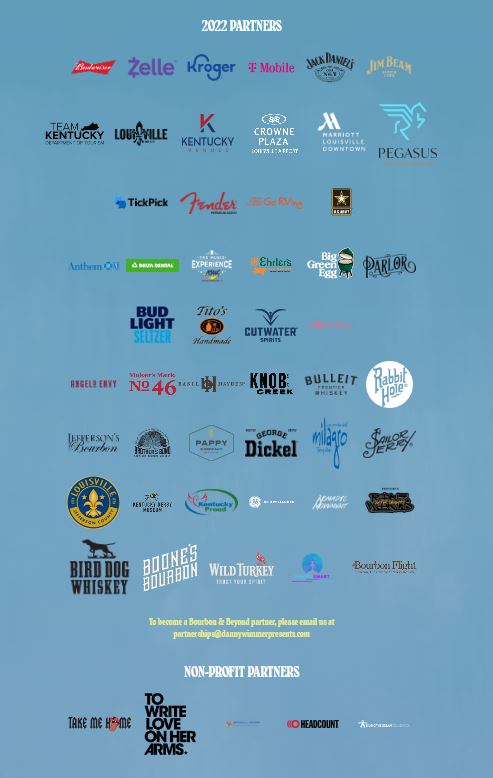