Not so very long ago, fruits and vegetables appeared in markets seasonally – when the food was ripe and tastiest. Strawberries for a few weeks in spring. Sweet peaches and juicy tomatoes during the summer. That’s when they were best, and that’s when you would find them.

In those days, apples were a quintessential fall treat, eaten raw, baked into pies, or dipped in caramel or red candied coatings.

These days, international trade, advances in transporting and preserving fresh fruits, and supermarket produce strategies have made the concept of seasonal eating passé. Maybe I’m part of the last generation to think so, but I believe that certain foods should only be eaten at specific times of the year – when they are ripe and in season.

Louisville cooks are lucky to have a fine variety of locally raised apples that reach ripeness throughout the growing season. Early-season June apples (also called Lodis or Early Transparents) usually finish their season by the Fourth of July. They are excellent for making apple sauce – but are a bit too tart and mealy to serve as eating apples.

But the best and most versatile locally-grown eating and pie apples arrive at area markets and farms in late summer, and remain abundant well into the fall.

Regional orchards always bring interesting varieties to market – and this year we can expect bumper crops and plenty of choices, since there were no late frosts to nip the blossoms in the bud.

Apples in America – and beyond

Perhaps in large part due to the enduring image of Johnny Appleseed, apples have become part of the American mythos. According to Michael Pollan in The Botany of Desire, there actually was an Ohio-based orchardist in the very early 1800s who made a career in trading in apple seedlings along the Ohio River valley, the gateway into the Northwest Territories, which were to become the upper Midwest states of Ohio, Indiana, Michigan and Wisconsin. John Chapman traded mostly in cider apples, for those are what farmers on the westering frontier wanted and needed – a source of sweetness and a source of easily brewed, low potency alcohol, from their own farmsteads.

But as much as apples are entrenched in the legends, lore and documented history of America, the apple is not native to the New World. The biological origins of the apple are still in some debate, but plant geneticists now think they can show that apples originated on the hillsides of Kazakhstan (rather than in the Caucasus mountains, as historans once surmised).

The ancient Silk Road ran through Kazakhstan, and apples became one of the many exotic goods that traders carried from Asia to the West. Although some archaeological evidence suggests that apples were part of the Northern European diet as early as 300-500 CE (and the European crab apple originated in the West), archaeobotanical and genome studies show that the apples we eat today originated in the Tien Shan Mountains of Kazakhstan.

Apples flourish in cooler climates, and by the early Middle Ages they had become part of the rich culinary traditions of Germany, France and England. Over the centuries, the apple spread around the world to South America (where Chile is a major producer) and Australia (where the Granny Smith was developed). Global apple production and supply chains account for year-round availability of apples in our supermarkets.

Apples’ genetic origin is important because of the complexity of the fruit’s genome. Apple seeds do not produce seedlings that replicate the parent tree. Apples grown from seed most often produce unpalatable fruit – rock hard or mushy, mouth-puckeringly sour or initially sweet, but increasingly bitter when chewed.
These were the kind of apples grown from seed that John Chapman actually sold around the mid-West – fruit that was not great to eat, but that made fine cider.

The complexity of the apple genome has inspired generations of orchardists and scientists to create thousand varieties of apples, with distinctive taste profiles, textures, sizes and colors. But many of the older apple varieties, much beloved by local constituencies, had poor keeping qualities, or were too easily bruised in transport, or did not have superficial visual appeal, being asymmetrical, or splotchy in color, or with a skin that couldn’t be shined for display in a supermarket produce case. These days, the exigencies of the market have reduced commercially available apples from thousands of varieties to perhaps a dozen or so.

Concerned about the loss of genetic diversity in the commercial apple crop, plant breeders are using the early apples still grown in Kazakhstan to cross-breed desirable traits such as pest and disease resistance into modern apple varieties.

In addition to being historically and scientifically interesting, apples are a versatile fruit, adding texture and taste to salads and soups, as well as desserts, and setting off flavors in meat, especially pork. Here are a few interesting and not too difficult ways to add apples to your seasonal diet. 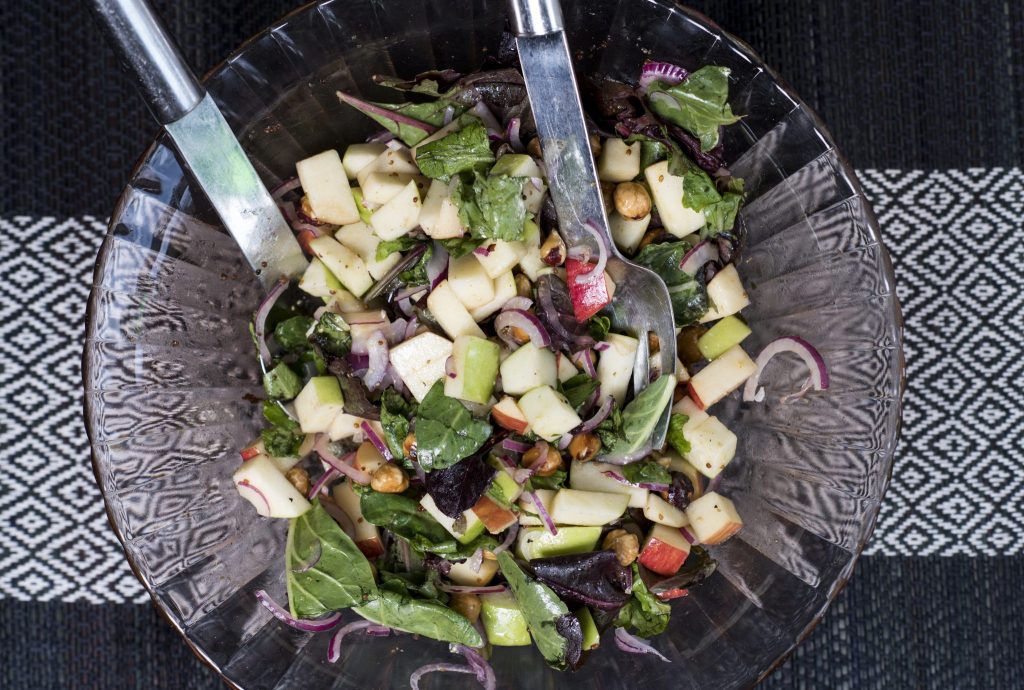 I found this recipe in a rather cumbersome (it’s over a thousand pages!), but often interesting cookbook, Starting with Ingredients: Quintessential Recipes for the Way We Really Cook by Aliza Green.

In a heavy pot, simmer the cider over low heat until it is thick and syrupy, reduced to about ¼ cup in volume. be careful not to burn as it reduces.

Remove from heat, pour cider into a blender, add remaining dressing ingredients, and blend until smooth. 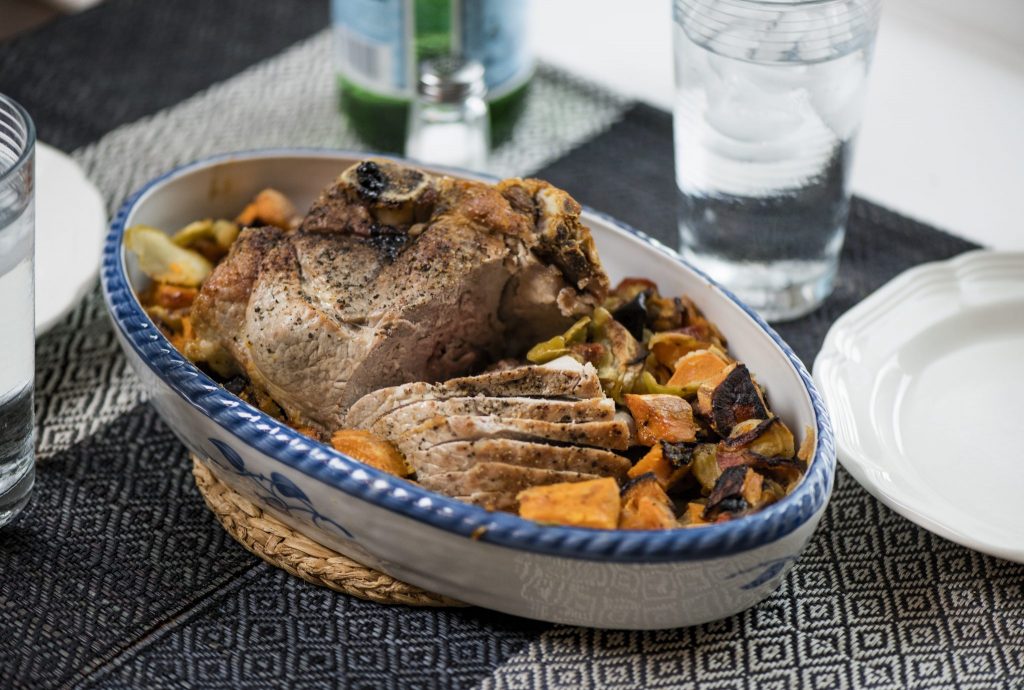 Roast two stars of the autumn harvest — apples and sweet potatoes — alongside pork for a satisfying meal in a single pan. Props to Martha Stewart for inspiring this recipe.

Heat oven to 475 degrees. Coat a heavy-bottomed metal roasting pan with 2 teaspoons oil.
Place pork in center and season with salt and pepper. Roast until top is golden, about 15 minutes.

Remove pork, apples, and sweet potatoes from pan. Allow meat to rest 10 minutes before slicing. To make the sauce, whisk flour into pan drippings over medium heat, then slowly whisk in chicken broth and cook until thickened. 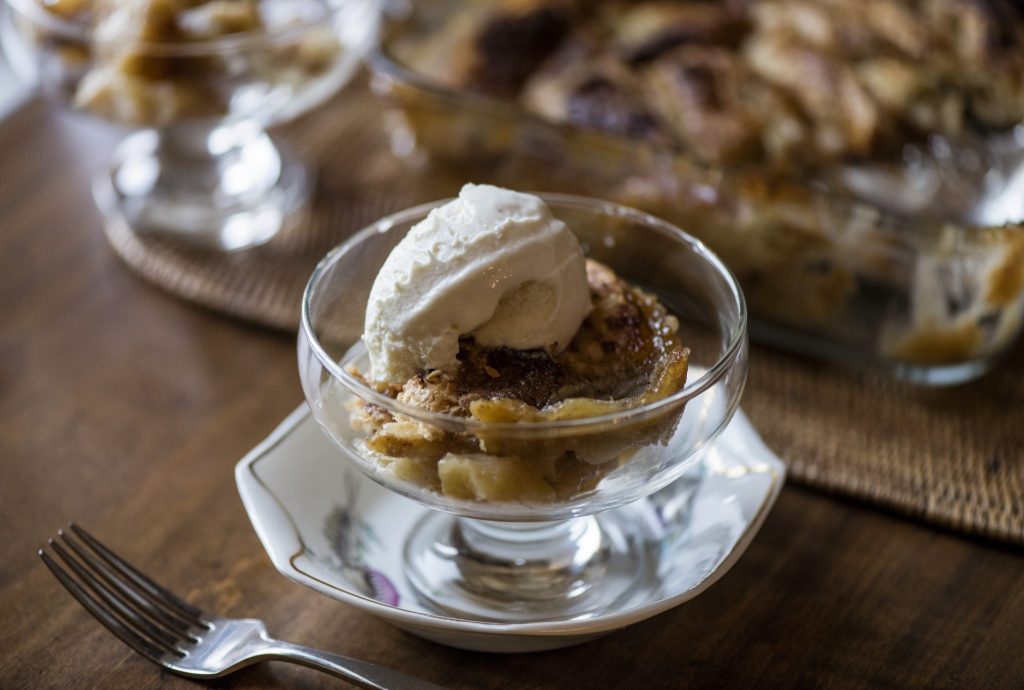 This version of pandowdy, a traditional, homespun recipe, was featured in Bon Appetit back in 2016.

Heat oven to 425°. Cook 6 tablespoons butter in a small saucepan over medium-low heat, swirling often, until bubbling and golden, about 5 minutes; set aside.

Peel apples, then stand them upright and slice down along core, working all the way around to remove big lobes of flesh. Cut lobes lengthwise into 1″ pieces (irregular shapes are fine). Discard peel and cores. Transfer apples to a large bowl.

Add brown sugar, flour, vanilla, cinnamon, and ½ teaspoon salt to bowl with apples. Using a microplane or fine rasp grater, grate zest of half a lemon over apples. Cut lemon in half and squeeze juice from zested half over apples, catching any seeds. Remove peel from ginger, then grate over apples. Toss apple mixture until combined, then transfer to a shallow 3-quart baking dish. Drizzle all but 2 tablespoons brown butter over apples.

Bake pandowdy until pastry is puffed and golden around edges, 25–30 minutes. Reduce oven temperature to 350 degrees and continue to bake until juices are thick and bubbling and pastry is brown all over, 30–35 minutes longer. Using a spoon, press pastry down into warm juices (but don’t fully submerge); let cool slightly. Serve pandowdy warm with ice cream, if you wish, but it is fine all by itself. F&D