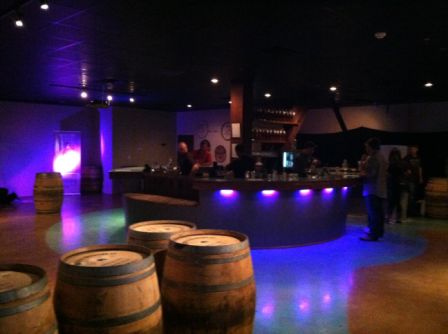 Here’s a cool and unexpected Derby Week bar opportunity: Angel’s Envy (the super-premium bourbon made by master distiller Lincoln Henderson) is hosting a pop-up bar from tonight through Sunday at 400 E. Main St., right across from Slugger Field.

For a temporary spot, it’s purty cushy. Check out the picture.

Angel’s Envy is using the opportunity to trot out its new rye whiskey (Angel’s Envy Rye), a small quantity brew to be made available in less than a dozen states in May. It’s made from a mash of 95 percent rye and 5 percent malted barley, and aged at least six years in new, charred American oak barrels before a final, 18-month rest in Caribbean rum casks originally used for Cognac.

According to a news release, the “mingling of raw, spicy and earthy rye notes paired with the sweetness imparted by rum finishing, results in an ultra-smooth and accessible ultra-rye whiskey, even at 100 proof.”

Equally interesting is this news: Bartenders for the pop-up are all from Meat, which is temporarily closed due to a dust-up with its landlord, owners of The Blind Pig, located directly below the second story bar.

If you visited the pseudo-speakeasy before it closed, you may have met barkeeps Marie Zahn, Julie Ragan, Reina Shannon and Bradley Hammond, all of whom will be shaking and mixing this week at the pop-up. Go by and say hi and belly up for a custom cocktail created just for this event.

Need another reason to go? Proceeds from the pop-up bar will be donated to the Kentucky Bourbon Historical Society, which wants to open and operate a bourbon museum in downtown Louisville.

Henderson and his two sons, who operate Angel’s Envy, will make random appearances throughout the week, so expect some distiller face time.

KRA Louisville presents its 48th annual “The Taste of Louisville” on Wednesday, Oct. 12

“A Taste for Life” returns to Four Pegs on Sunday, October 2