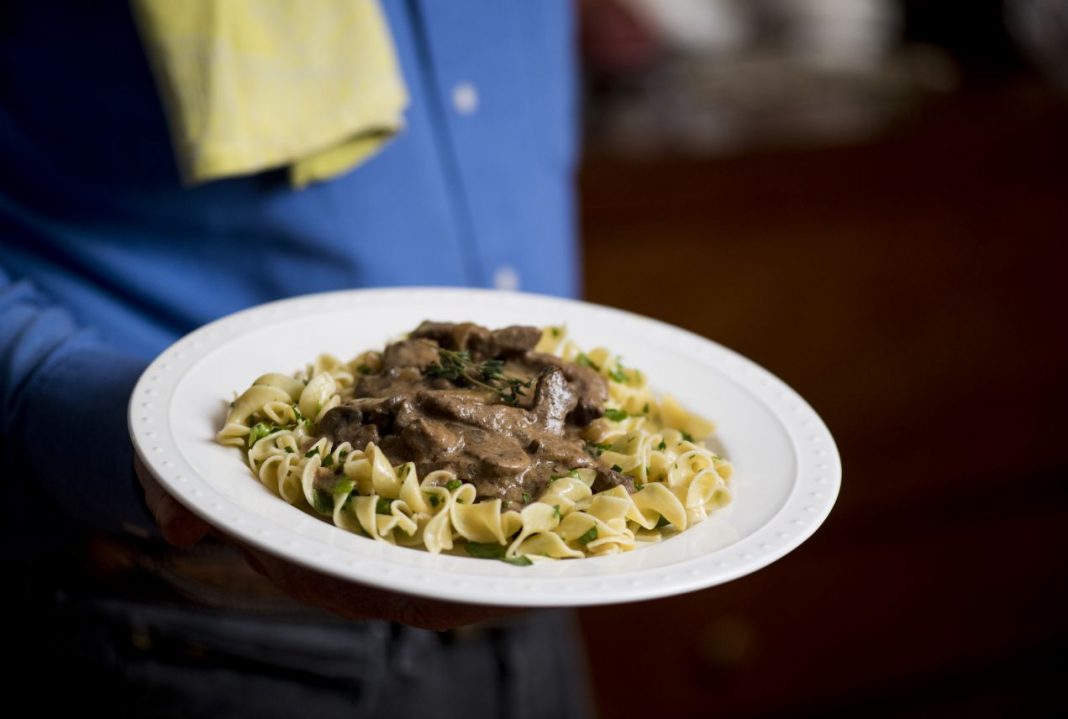 Don’t Follow the trends. Rediscover the classics. Or, whatever happened to boeuf bourguignon?

One of the more entertainingly silly food stories that appear regularly in newspapers’ food sections and cooking magazines is the annual prognostications of new food trends likely to appear in the next year. The New York Times, Prevention Magazine, Eater and Supermarket News are just a few that jump on this annual bandwagon, and in January they all ran stories predicting the food and drink “trends” that will be gaining popularity this year.

(Originally published in the Spring 2019 issue of Food & Dining)

Some of these anticipated trends include “peganism” (a paleo version of veganism), CBD-infused drinks (a boon to Kentucky hemp farmers), lab-grown “motherless” meat (no thanks) and oat milk. The last of these is not actually milk, but oats soaked in water, pressed, and the resulting liquid reduced in volume — offered as a way to lighten your coffee for those who like lightened coffee but for other trendy reasons strive to avoid dairy products.

Various publications at the start of the year opined that less familiar grains such as bulgur, farro, chia seed, hemp seed and quinoa would continue to become more familiar. Other food stories posited that cabbage or mushrooms, or “sea vegetables” (seaweed) would depose cauliflower as the vegetable of the moment. (Where you even aware that kale had been dethroned in the trendiness pantheon by what Mark Twain described as “a cabbage with a college education?”) The NY Times touted, among other trends, the emergence of new ethnic cuisines: the foods of such unfamiliar places as Syria, Kazakhstan, Uzbekistan, and Georgia (the country in the Caucasus, not the state above Florida). Cooking all components of a meal at one time spread out on a large sheet pan had its moment in the sun this past year; a few different periodicals put forth the prediction that this year that technique will be superseded by cooking all components of a meal at one time by wrapping everything in foil.

In pondering this often risible list of possible new food trends (Uzbeki cuisine, for instance, is dominated by fried dough, pilafs, kabobs and stew made with mutton and horsemeat), we got to wondering what makes foods untrendy. That is, why do some dishes that once were mainstays on sort-of-fancy restaurant menus and yet doable by home cooks fall out of favor?

The recent disappearance of boeuf bourguignon from general cultural consciousness is what precipitated this bout of recipe pondering. If we can believe the narrative of the movie “Julie & Julia,” trying out Julia Child’s instructions for this classic French stew is what convinced the book editor Judith Jones to champion the publication of “The Art of French Cooking.” For a while, Julia Child’s somewhat labor-intensive recipe became the sine qua non of aspirational home dinner parties, and the dish had a vogue in upscale restaurants. But it is not in vogue anymore.

Neither are beef stroganoff or chicken paprikash, two other dishes that once were probably many Americans first introduction to “ethnic” food. All three of these dishes are not hard to prepare, requiring some (but not a lot) of preparatory peeling and cutting, and calling for easily found ingredients that result in dishes that are just showy enough to make guests exclaim as the cook basks in kudos for the effort.

Here, I turned to Julia Child’s boeuf bourguignon recipe and found a few places to simplify it without changing its essential character. Beef stroganoff and chicken paprikash are dishes I make periodically — often when I have sour cream I want to use up.

All three recipes call for the use of beef or chicken stock as a basis for the sauce. This gives me a chance to tout my favorite kitchen shortcut: Better Than Bouillon stock and soup bases. Flavor bases are stocks that have been cooked down to jelly-like consistencies, which concentrates the flavors that bloom again when dissolved in water. You can find Better than Bouillon in chicken, turkey, beef, mushroom and roasted vegetable flavors in the soup aisle at supermarkets. I used to make my own stocks from carcasses and bones to freeze for future use. They took up a lot of space in the freezer. Eight-ounce jars of Better than Bouillon bases take little space in the fridge, last for months and add much flavor to sauces, gravies and soups. It is what I have used for stock in these recipes. While I did make fun of predicting food trends, I will un-ironically offer one of my own: look for wide curly egg noodles to elbow their way into more prominence as a side for fancy stews. 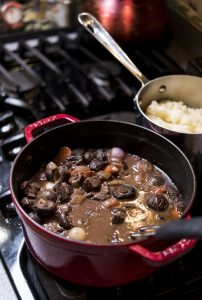 This is a long-cooked stew, a braise, and needs meat that has fat and some gristle, which will slowly dissolve in long, low heat to enrich the wine sauce. Chuck roast is the ideal cut for this dish. The wine should be full-bodied table wine that you would ordinarily enjoy drinking. Leave “cooking wine” on the grocery shelf.

Heat the olive oil in a large Dutch oven. Add the bacon and cook over medium heat, stirring occasionally, until the bacon is lightly browned. Remove the bacon with a slotted spoon and reserve.

Dry the beef cubes by blotting with paper towels and then sprinkle them with salt and pepper. In batches in single layers, sear the beef in the hot oil for 3 to 5 minutes, turning to brown on all sides. Remove the seared cubes to the plate with the bacon and continue searing until all the beef is browned. Set aside.

Toss the carrots, and onions, 1 tablespoon of salt and 2 teaspoons of pepper in the fat in the pan and cook for 10 to 15 minutes, stirring occasionally, until the onions are lightly browned. Add the garlic, and cook for 1 more minute. Add the Cognac or other liquor, stand back, and ignite with a match to burn off the alcohol. When flames subside, put the meat and bacon back into the pot with the juices. Add the bottle of wine plus enough beef broth to almost cover the meat. Add the tomato paste and thyme. Bring to a simmer, cover the pot with a tight-fitting lid and place it in the oven for about 1 hour and 15 minutes or until the meat and vegetables are very tender. When pierced with a 2-prong fork and the fork comes out free without lifting any meat, the meat is done.

Combine 2 tablespoons of butter and the flour with a fork into a paste and stir into the stew to thicken the sauce. Add the onions. Sauté the mushrooms in 2 tablespoons of butter for 10 minutes until lightly browned and then add to the stew. Bring the stew to a boil on top of the stove, then lower the heat and simmer for 15 minutes. Season to taste. Serve with mashed potatoes.

The Russians, who devised this dish, apparently spared no expense, and routinely used beef tenderloin. Cuts that are somewhat more economically accessible and work just as well include top sirloin, strip steak or flat iron steak. I have found excellent top sirloin (packed 5 or 6 steaks to a package) in Costco for a reasonable bulk price. Kroger’s on Bardstown Road often has meat specials in the center cooler, where I have found equally good prices on strip steak now and again. You can use the common button mushroom or any combination of others that suits your fancy.

Heat 2 tablespoons oil and 1 tablespoon butter in a large skillet over medium-high heat. Add mushrooms, onions, garlic and thyme, season with salt and pepper, and cook, tossing often, until mushrooms are golden brown and tender, 10–12 minutes. Transfer to a large bowl.

Pat the beef slices dry with paper towels. Toss the sliced beef in the seasoned flour until it is well-coated, shaking off excess. Increase heat to high and heat 2 tablespoons oil and 1 tablespoon butter in same skillet. When oil is shimmery, cook beef in batches (to avoid crowding in the pan) until browned and beginning to crisp on all sides, 5–8 minutes. Transfer to bowl with mushroom mixture.

Add broth to the skillet, bring to a simmer, and cook until reduced by half, 20–25 minutes. Ladle a 1/2 cup or so of the broth into a bowl and let cool a few minutes.Whisk in sour cream, Worcestershire sauce, and mustard until smooth; season with salt and pepper. Add the sour cream mixture back into the pan and simmer until sauce is thick and creamy. Add mushrooms and beef with any accumulated juices and cook, stirring occasionally, until just heated through.

Arrange noodles in center of serving plate, and spoon Stroganoff over top. Garnish with additional parsley and chives. 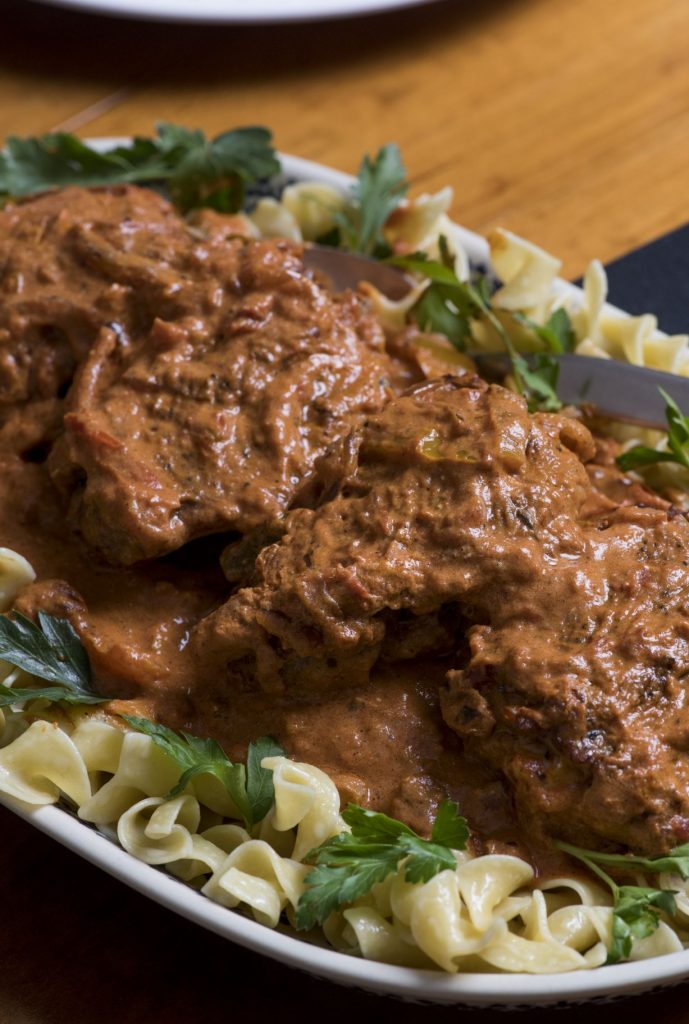 Skin-on, bone-in chicken thighs will give the best flavor as will good quality paprika. Use hot or sweet paprika, to your taste.

Pat chicken dry with paper towels. Season both sides of the chicken thighs with salt and pepper. Set chicken aside. Heat oven to 350 degrees.

Heat a large ovenproof skillet over medium-high. Add 1 tablespoon butter; when melted and sizzling, add chicken skin side down and cook until skin is golden brown and crisp, 8–10 minutes. Turn chicken over, and brown the other sides. Transfer chicken skin side up to a plate.

Pour off fat from skillet; then add rest of butter. When sizzly, add onion, peppers and garlic. Season with salt and pepper and cook, stirring often to dissolve browned bits on bottom of skillet, until onions are translucent, 6–8 minutes.

Sprinkle the vegetables with 3 tablespoons paprika and ¼ teaspoon cayenne. Cook, stirring constantly, just until vegetables are evenly coated and spices are fragrant, about 30 seconds. Be careful here, for the spices can burn easily.  Add tomatoes to skillet. Fill can two-thirds with white wine and swirl, then add to skillet. Stir until incorporated, season with several pinches of salt, and bring to a simmer.

Arrange thighs skin side up back in skillet (along with any accumulated juices), nestling into liquid but not submerging (you want the skin to be exposed so it stays crispy).  Transfer skillet to oven and roast until chicken is fully cooked and tender enough to release from the bone when prodded with a fork, 35–40 minutes.

About halfway through chicken cook time in the oven, bring a large pot of salted water to a boil. Add 12 ounces of egg noodles and cook according to package instructions, stirring occasionally with tongs. Drain noodles in a colander. Transfer to a large bowl, add remaining 2 tablespoons butter, and toss to coat until butter is melted and noodles are coated. Season with salt and pepper. Finely chop ½ cup parsley and add half to noodles; toss to coat.

Carefully remove skillet from oven. (Handle will be hot!) Using tongs, transfer chicken skin side up to a clean plate. Taste sauce and season with more salt and pepper, if needed. Spoon about ¼ cup sauce into a small bowl, and stir in sour cream until smooth. (This will temper the sour cream so it doesn’t curdle when it hits the hot skillet.) Pour back into skillet, and stir to combine.

Arrange chicken thighs and juices back in skillet and heat through, another 5 minutes or so. Serve over noodles topped with remaining chopped parsley. F&D