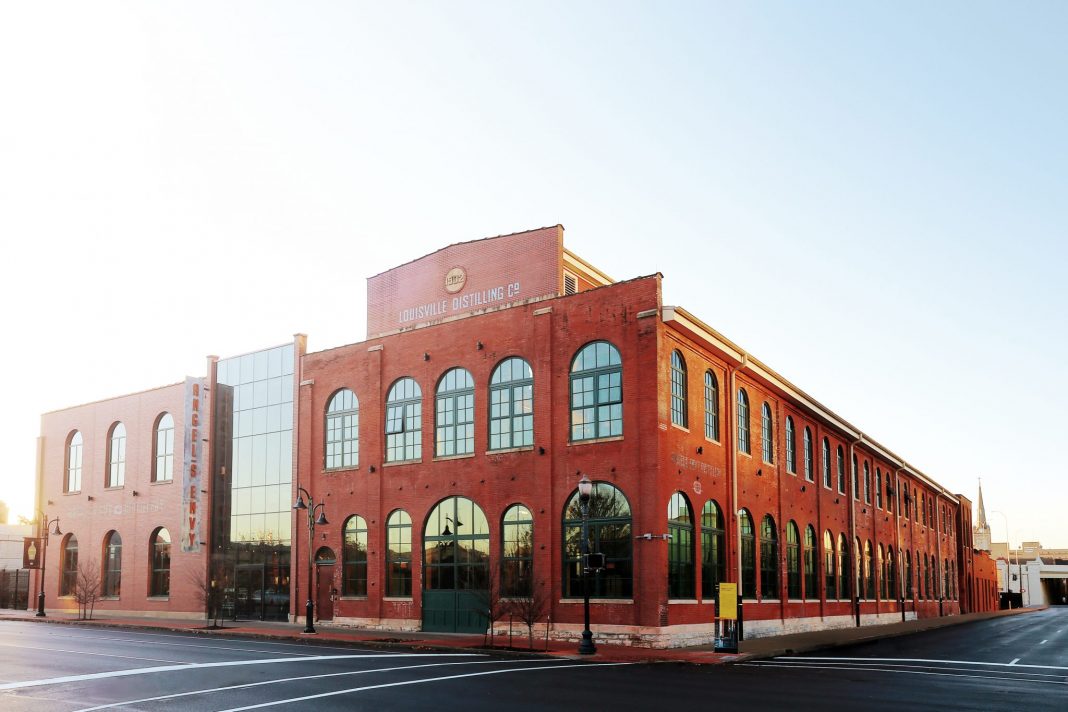 How a once-rundown urban corridor has become a bourbon destination

In the decades between the end of the Civil War and the beginning of Prohi-bition, Louisville’s Main Street was the epicenter of the American whiskey trade. Thanks to its proximity to the Ohio River, Louisville was the major port for shipping bourbon and rye throughout the United States (and beyond). More than 70 businesses along Main were associated with the industry. These included warehouses, publishers of trade journals, steamboat (and later, railroad) companies, bottle label printers, metal workers, dry goods stores, banks, saloons, hotels, and restaurants. Virtually every distiller or wholesaler in Kentucky had offices on Main Street, also known as Whiskey Row. Brown-Forman’s master distiller, Chris Morris, has been widely quoted as saying Main Street was “the Wall Street of bourbon.”

The scores of businesses along Whiskey Row were housed within notable architecture. As it still does today, Main Street featured the largest collection of Victorian era cast-iron facades in the United States outside of Manhattan’s SoHo district. The red sandstone Columbia Building, at Fourth Street and West Main, was completed in 1890 and housed numerous whiskey related offices. At 10 stories, it was Louisville’s tallest building, the same height as Chicago’s Home Insurance Building, considered the world’s first skyscraper. (The Columbia was demolished in 1966, but one of its sandstone blocks sits on the corner where the building stood.) German immigrant Frederick Stitzel had patented a new warehouse design, consisting of an interior lattice of ricks, that kept barrels from crushing those they sat atop and allowed air to circulate around each one for more even aging. It’s still the industry’s standard.

Prohibition devastated the once-thriving heart of Louisville commerce. The offices were shuttered. There was no need for all the support services for an industry that was now extinct, other than for the few select companies that could still sell “medicinal whiskey.” The cast iron-fronted buildings gradually fell into disrepair or housed down-at-heel businesses such as military surplus. If you were a penurious artist, you could rent a loft at a rock bottom rate. Heat was not necessarily a feature of the property. The sidewalks, once filled with pedestrians, were virtually empty.

Very gradually, beginning in the late 1970s and early 1980s, that began to change. The sturdily constructed historic buildings were restored to house new museums and firms looking for downtown homes. Actors Theatre of Louisville became an anchor. The Kentucky Center for the Arts brought new life to the area. And arts groups and non-profits opened offices in the district.

Fast forward to 2013 and Museum Row – with the Kentucky Science Center, Louisville Slugger Museum, and Muhammad Ali Center – begins its transformation into the new Whiskey Row with the opening of the Evan Williams Bourbon Experience at 528 West Main.

Today, Whiskey Row has grown and matured into Louisville’s Bourbon District. Fifteen blocks long, it starts west of downtown, at 10th Street, home of Kentucky Peerless Distilling (which occupies a former tobacco warehouse) and runs east to Jackson Street, where Angel’s Envy Distillery is located in the refurbished Vermont American Building (across from Slugger Field).

Yellow, orange, and black signs located along most of the blocks of West and East Main that comprise the district, note which buildings or sites were associated with particular whiskey-related businesses. An attentive visitor can soak up quite a lot of bourbon history while walking this stretch of Main.

One important fact: There were no actual working distilleries on Main Street during the pre-Prohibition era.

Today there are four. In addition to Peerless and Angel’s Envy, Old Forester has a working distillery in the 100 block of East Main (in buildings that contained the company’s offices in the early twentieth century). And Michter’s Micro-Distillery is located in the historic Fort Nelson Building at the corner of West Main and 8th Street (the firm’s main distillery is in Shively, as is Old Forester’s).

All four of these are open to the public and feature tours and tastings. Peerless has become famed for its rye whiskey and has just released its first bourbon. Michter’s features the pot still from the former Michter’s Distillery in Pennsylvania and has an elegant cocktail lounge overlooking Main Street. Evan Williams has an eye-catching fountain that looks like a giant bourbon bottle pouring spirit into a glass, a micro-distillery, one floor that recreates nineteenth century Whiskey Row, and a Speakeasy. Angel’s Envy’s creative reuse of the century-old manufacturing building includes an ­elegant event space and bar. It’s custom-made Vendome Copper & Brass Works distilling equipment features a spirit safe in the shape of its whiskey bottles. And within Old Forester there’s a mini-cooperage where visitors can see the barrel making process up close, as well as a towering column still, a warehouse space, and, yes, a cocktail bar.

The hotels, saloons (we now, of course, call them bars.), and restaurants are back. Several are part of Louisville’s Urban Bourbon Trail, members of which must have extensive bourbon lists and, if they are restaurants, feature some dishes using bourbon as an ingredient. Proof on Main is located inside the 21C Museum Hotel and Corner Restaurant & Bar is in the Aloft Hotel.

Other bourbon-centric bars and restaurants along Main (or just off it on a side street) are Doc Crow’s Southern Smokehouse & Raw Bar, Down One Bourbon Bar, Merle’s Whiskey Kitchen, Patrick O’Shea’s, Sidebar at Whiskey Row, and the Troll Pub Under the Bridge. These too, are part of the Urban Bourbon Trail.

One notable bar with a creative cocktail list, but not a member of the Trail, is the Hell or High Water speakeasy on East Washington Street. It is literally under Whiskey Row, since patrons enter a small room and are escorted downstairs to a warren of 1920s-decorated rooms. It’s below the block on the south side of which is the Old Forester Distillery.

A perfect way to get oriented to the bourbon history and the attractions of Whiskey Row (and the rest of Bourbon Country) is to start at the Frazier Kentucky History Museum, 829 West Main. It is the official Bourbon Trail starting point. Almost an entire floor is given over to bourbon history, including the effects of Prohibition and a room with an interactive touch-screen table with entries on people, places, and events important to the industry. Another room has a display with bottles of every brand of bourbon currently made in Kentucky. Even better, many of these can be purchased in the ground floor shop, as well as some collectable (and pricey!) historic bottles.

Quite conveniently, Art Eatables, a shop specializing in bourbon-infused artisan chocolate, is located next door to the Frazier. After all, what better combination is there than bourbon and chocolate?