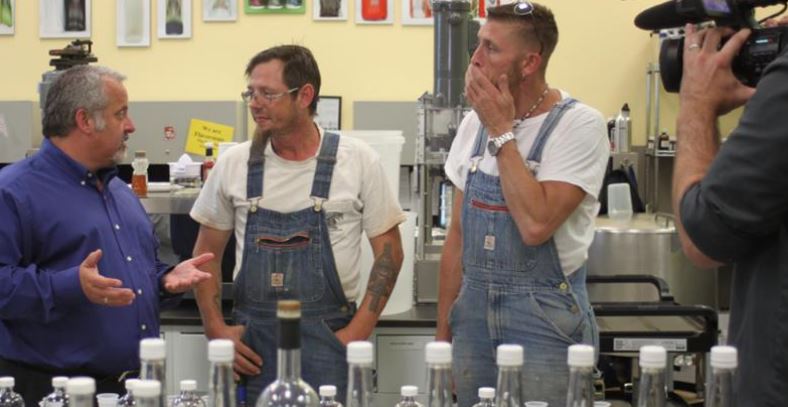 Fans of the hit TV show, “Moonshiners,” may not know that characters Bill and Josh, the hard luck hill boys who had little success making their high-octane hooch last season, came to Louisville’s Distilled Spirits Epicenter a couple of months ago to learn more about their own craft. And as this year’s new season kicked off, the first episode showed some of their visit to DSE.

During that day-long visit, cameras followed the two as David Dafoe, founder of DSE and its parent company, Flavorman, and his team taught the illegal whiskey makers a thing or three about how best to manage and maximize their sly craft.

Not much of a spoiler alert: If you watched the show, you saw the two men in learning mode. With the Discovery Channel’s pre-airing gag order lifted, Dafoe shared a few reflections about what it was like to have the crew in the house.

“There was no coaching at all. The crew stood back and let the ‘action’ happen naturally. They asked us to educate them in the distillery, teach them how we taste distilled spirits and then take them to Flavorman and show them how we develop beverages.”

Dafoe said both moonshiners were friendly and funny, but that Bill, the bespectacled, ball-cap-wearing and bearded character, was the most distilling-knowledgeable of the two.

For DSE allowing the “Moonshiners” crew in its building for 13 hours: “We got hundreds of Twitter followers after the episode and dozens of internet requests for information on the next classes. Bill called me last night and congratulated me on the episode. He told me we would get random visitors after the airing, and just this morning there was a guy standing on the sidewalk taking pictures of our building.”