The Story Behind the Neeley Family Distillery

On a fateful August day in 1906, in Owsley County, Kentucky, fourteen-year-old Leonard Neeley stood behind a tree with a gun in his hand just outside the home of moonshiner Robert Allen. Leonard’s older brother, McKinley, had told him he would flush Robert Allen out of the back of the house by entering the cabin through the front. If McKinley weren’t able to get a clean shot at him as he came in through the interior of the house, it would be Leonard’s job to shoot Robert Allen as he came out the backdoor…

(Originally published in the Summer 2019 issue of Food & Dining)

Just a week earlier in Owsley County, tensions between two moonshining families — the Allens and Neeleys — led to a gun battle which would leave the head of the Neeley family, Jess Neeley, dead. He was killed by the head of the Allen family, Robert Allen. The gun battle would also take the life of a member of the Allen family and leave eight others injured between the two clans.

Not soon after Robert Allen’s arrest, a mob of Neeley family members gathered outside the courthouse where he was held with plans to rush the building and deliver their own brand of justice. This prompted authorities to transfer Allen to a more secure facility under a heavy federal troop escort.

McKinley Neeley got word that Robert Allen had made bail and was planning on going home to pick up some personal effects before going into hiding as he awaited trial. The boys knew if they were going to get the justice they sought for their father, they would have to take care of this by themselves before he disappeared.

Leonard, behind the tree with the gun held at his side, heard glass breaking as McKinley broke through the front door. There were yelling and commotion, but no gunshot. Suddenly, the backdoor flung open, and Leonard Neeley jumped out from behind the tree, face-to-face with a surprised Robert Allen…

(See Royce Neeley on a recent episode of the Discovery Channels Moonshiners here.)

I could literally feel the hairs on the back of my neck rising as Royce Neeley, the 27-year-old owner of Neeley Family Distillery, stood in the front room of his distillery by a case that contained the guns, artifacts and newspaper articles from the story he was telling me. A fourteen-year-old boy standing by himself in the woods, waiting with a gun for the man who killed his father? This isn’t real life; this is the kind of stories reserved for the movies or TV shows like the Sopranos.

I could tell as he paused between sentences, Royce Neeley wasn’t bragging, but he wasn’t embarrassed either. He was simply telling me the story of his family. It was evident from the passion in retelling this event, even though he wasn’t involved in a gunfight which occurred over 100-years prior, it was his story. It was the story of the Neeley family and making whiskey, and everything that goes with it. It has become his own personal history.

When we think of whiskey and how the history of it ties to U.S. history, two families are often in the mix: the Samuels and the Beams. Rob Samuels, President of Maker’s Mark, is an eighth-generation whiskey maker. Freddie Noe, who is in the process of taking over the role of Master Distiller at Jim Beam from his legendary father Fred Noe, is also an eighth-generation distiller.

Despite the amazing pedigrees of the Samuels and Beam/Noe families, the Neeleys may be the longest lineage of American whiskey. Before recounting the McKinley/Leonard face-off with Robert Allen, Royce Neeley had walked me through the Neeley family history. He is the eleventh-generation in his family to make whiskey. James Neeley, the family’s patriarch, had come over from Northern Ireland in 1740 with his copper pot stills in tow. He immediately started making whiskey as a way to supplement his family’s farming income.

In 1850, when talks about taxing whiskey as a means to raise money for funding troops for what would become the Civil War, James Neeley’s great-great-grandson Joseph Neeley, moved the family to remote Owsley County in Eastern Kentucky where they would be able to continue to make whiskey in the woods with no worries about paying taxes.

Royce noted that being born into the Neeley family meant you had one of two career paths — moonshining or law enforcement. Royce is fully aware of the dichotomy of the two careers. If you are going to run an illegal moonshining operation though, it’s always a little easier if you have the law on your side.

Royce notes that his father, Roy, intended to be the last generation in the family to make whiskey. The violence and murder, having to always look over your shoulder, this was not something he wanted to subject his family too. So Roy gave up making whiskey and ultimately became a well-respected contractor in Owsley County building homes.

Royce talked about hearing the stories of his father, grandfather, and generations before were better than anything movies or TV shows he watched, so he became infatuated with moonshining. Young Royce’s persistence led to his father relenting and finally showing him how to make moonshine just like generations of Neeleys before him. Roy did this only to share family history, never with the intention of having Royce get into the business.

While attending the University of Kentucky, Royce’s mother, Michele, noticed Royce had quit asking for his monthly spending money. That seemed to be unusual for a college student, so she decided to pay him a surprise visit. What Michele found was a full-fledged distilling operation going on inside of Royce’s dorm room. She confiscated the still and made Royce agree never to make whiskey again.

Royce talks about how he explored his options after graduating from the University of Kentucky, but all he really wanted to do was to make whiskey. Finally, seeing his passion, his parents agreed to assist him in making his dream come true. They acquired a plot of land right next to Kentucky Speedway in Sparta, Kentucky, and began building Neeley Family Distillery. 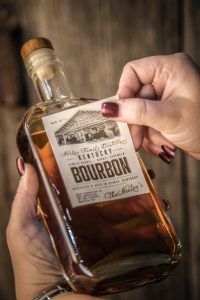 The distillery opened in July 2017 and is a monument to everything all eleven generations of Neeleys have brought to whiskey.

Production is a throwback to what his family has always made — whiskey. The fermenters — stainless steel or plastic in most facilities — are cypress which imparts a unique flavor you can’t recreate in the cheaper, more industrial fermenters most distilleries use. These cypress fermenters are also open-air (no lids) allowing local yeast strains from the air to be introduced as the yeast turns the mash into alcohol, imparting a flavor that couldn’t be recreated anywhere else, even with the same recipe and equipment.

A column still and a sour mash (using some of the mash from a previous batch like a sourdough bread starter), which you see at almost every other distillery, would mean Royce could be much more efficient in what he is doing. Instead, he eschews the often-used shortcuts and elects to use a pot still and sweet mash process — meaning all of the equipment has to be cleaned thoroughly after each batch. Yes, it slows things down, but that’s how 10-generations of Neeleys before Royce made their whiskey and he isn’t changing something tried-and-true for almost 280 years.

After our family history lesson, Royce took us through production where we saw the process he goes through to make his whiskey. I noticed a guy who looked like the prototype of a moonshiner working the pot still during my visit. “That’s my grandfather Earl on my mother’s side. He used to be a customer of my great-grandfather Leonard back when he was ‘shining,” Royce notes. He proudly continued, “He used to drive two counties over just to buy a pint of Grandpa Leonard’s whiskey.”

So how does the moonshine Royce is selling now taste?

Well, I can tell you that my tour ended with a sampling of Neeley’s products. Royce pointed out the fact he was thrilled the government didn’t make him change the recipe for his now legal moonshine. I took a sip and enjoyed the buttery, sweet and incredibly smooth whiskey. Royce also noted their first release of a 13-month old bourbon came out in 2018 and they will continue to make sporadic releases of bourbon until they have enough aged to have it regularly on store shelves.

I was also lucky enough to try a sample of his bourbon. I can tell you it’s like no other bourbon on the market today. His old-school process gives you a pop of flavors from those grains you just don’t find in the mass-produced offerings on crowded liquor store shelves.

…Yes, it’s true, on that August day in 1906, Leonard Neeley shot and killed Robert Allen. He would be released after a hung jury was unable to convict him. He continued selling his whiskey his entire life, dying in 1991 at the age of 101. Today, the Neeleys continue the family tradition of making whiskey. If you stop by you will meet Royce, Roy, Michele and grandfather Earl as only family members work at the distillery. F&D

Edibles & Potables: “Here’s how you can help tornado victims”