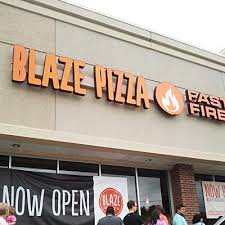 The first Blaze Fast-Fire’d Pizza restaurant in Kentucky is scheduled to open today in the Shelbyville Road Plaza.

To celebrate the grand opening, the Louisville location is having “Free Pizza Day” from 11 am to 11 pm tomorrow, June 10, and they will be giving away free pizza to anyone who comes in the door.

The California-based franchise is being brought to the area by Millennial Restaurant Group, the growing empire owned by Junior Bridgeman and his restaurateur partner Jim Patterson. They are planning up to 30 locations in Kentucky, Tennessee, and Florida.

The Blaze Pizza concept is “super-fast, custom-built pizzas.” Customers build their own 11-inch pie for about $7, using more than 40 sauces, vegetables, cheeses and meats. The pizza is then cooked and ready to eat in two to three minutes.