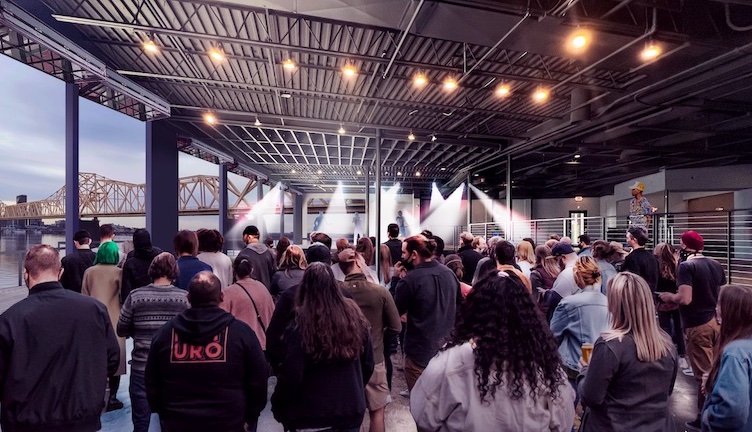 Two items from Jeffersonville, both reported by Laurel Deppen in Louisville Business First. Leading off, an appropriately named events venue at the long moribund and now extensively remodeled Rocky’s building.

A new entertainment and music venue is coming to a familiar site along the Ohio River. The Jefferson, a new music and event venue, is slated to open in the former Rocky’s Sub Pub at 715 W. Riverside Drive in Jeffersonville, Indiana, which closed in April 2018.

The Jefferson will benefit from its proximity to Upland Brewing Company.

“Almost like Hard Rock Café, but way cooler.” That’s how one of the owners of Losers 812 described the new bar and late-night grill opening in Jeffersonville, Indiana, on June 23.

The owners of Losers 812, which is located at 1005 Market Street, say their creation is all about filing a “void in the rock bar industry,” but there’ll also be food.

The kitchen will close at 2 a.m. The menu will include chips and queso, vegetarian options and signature sandwiches, including a “Fleetwood Mac and Cheeseburger” and a “Presley” sandwich tribute to Elvis Presley, which will include peanut butter, banana and honey.