Home CALENDAR of EVENTS And, over in Butchertown, its Lock, Stock & Smoking Barrels 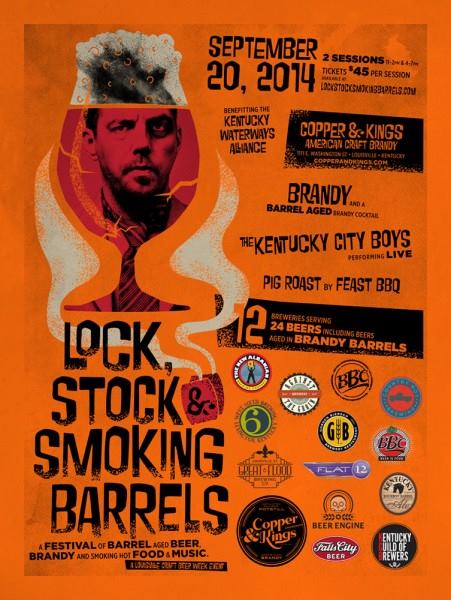 Competing fall festivals make it hard for dedicated local party goers to know which neighborhood to hang out in this weekend, Saturday, Sept 20.  In Butchertown, Copper & Kings brandy distillery, 1111 E. Washington St., is the host for a Craft Beer Week party they are calling Lock Stock & Smoking Barrels.

This will be “a festival of barrel aged beer, brandy and smoking hot food & music,” according to their press release. The main feature–aside from music and food–will be barrel-proof brandy tastings and 12 breweries serving 24 beers, including several made just for the event by being aged in brandy barrels.

Other local and regional breweries participating will be Gordon Biersch, Alltech, BBC St. Matthews, Flat 12, BBC Clay & Main and Falls City. Kevin Gibson will be on hand to discuss & sign his book, “Louisville Beer: Derby City History on Draft.”
A portion of the proceeds go to benefit the Beargrass Creek Alliance.